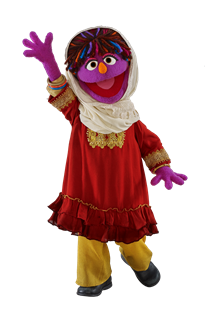 Sesame Street has a new kid on the block, and she is from the Middle East

All images courtesy of Sesame Workshop

Remember watching Sesame Street when you were a kid? Big Bird, Cookie Monster, Elmo and many other characters made the show a huge success, and make it one of the most-watched children's shows in the world. Now there's a new resident on "Sesame Street," and she's promoting women's rights in Afghanistan.

Meet Zari, a 6-year-old girl who was recently added to the cast of "Baghch-e-Simsim," or the Afghan version of "Sesame Street." Zari, which means "shimmering" in Dari and Pashto, is the first Afghan character on the show. She can often be seen wearing traditional Middle Eastern clothing, such as a veil.

Zari loves eating healthy, getting exercise and talking about general well-being and that one's body shape is OK no matter how fat or skinny. She addresses topics similar to issues most people face, especially adults. Most of all, Zari represents the idea that going to school and having a successful career are wonderful things for females to do. 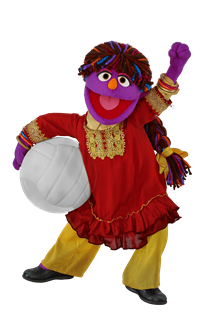 As stated in an interview with Sesame Workshop and "PBS NewsHour," "Baghch-e-Simsim" wants to "deliver lessons of literacy, math and life skills to millions of Afghan children, with a special emphasis on girls' education and cultural awareness."

For the development of Zari, Sesame Street partnered with the Afghan education ministry in order to show the importance of females in education. They want Zari to be a positive role model not just for girls, but for boys, as well. Their biggest hope is to change some of the harsh lifestyle restrictions in Afghanistan, specifically toward women.

For example, in order to promote the idea of education for all, Zari will talk to many different people with many different jobs. In one episode, she goes to her female doctor and talks to her about what it takes to become a doctor.

Sherrie Westin, Sesame Workshop's executive vice president, said in the interview with Sesame Workshop and "PBS NewsHour," "It's a way of making sure we are not just teaching, but we are modeling, which is very powerful. We know children learn best when they can identify themselves with characters on the screen."

She also talked about how research has found depictions of confident, educated girls have helped shaped not only girls' opinions, but boys' opinions, too.

The director of communications for Sesame Workshop, Philip Toscano, also had a say on Zari in the interview with Sesame Workshop and "PBS NewsHour." Talking about the research that went into developing Zari, he said, "In our effort to create more content, and relevant content, this was a natural step in production."

Toscano said Zari will appear for a majority of the series and will be around for a long time.

Mansoora Sherzad, a 23-year-old studying arts and music at Kabul University, is Zari's main player. Out of a selection of 150 young women, Sherzad made the final cut.

In an interview with The Nation, Sherzad said, "When I found out it was a 6-year-old girl character from Afghanistan, I thought it was fantastic. When I met her, I thought she was beautiful. She makes me laugh."

Trainers from Sesame Workshop's New York headquarters came to help train, and Sherzad traveled to India for training, preparing her for her role to help others in the Middle East overcome obstacles.

In her interview, Sherzad talked about how many women face education discrimination in Afghanistan.

"If I'm not an educated person, how can I do this for my babies and children?" she said. "For so many girls, it's like not being alive, and they end up working for others, but not understanding themselves."

Sherzad also talked about the risks of being a puppeteer for such a powerful character, especially in the Middle East. She said, "Generally, we are in danger in Afghanistan, because we are girls. It's hard to go to work with men all around us. At first I didn't want to tell people I work with the puppets, and I didn't want to give the media my photo, but I decided I have to be brave. I have to be brave for my future and for my life."

"Access to education for girls is still up to the male head of the household, and what they allow the women in their house to do with the education, as well," she said.

While Zari is designed to make children very happy, she may also make an impact on the harsh lifestyles in the Middle East. 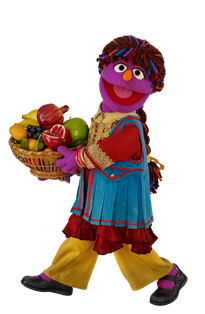