On Saturday, April 16, Niagara University held its yearly Special Olympics. This was a time for athletes to come and show off their basketball skills to family, friends and supporters. The athletes practiced different running, dribbling and shooting skills for weeks before the event.

Every athlete is a part of a team where they play against other teams showing pride and team spirit the entire way through.

When entering the Kiernan Center at Niagara University, the volunteers lined up in two lines so the athletes could run though as they entered, getting high-fived, hugged and cheered on. 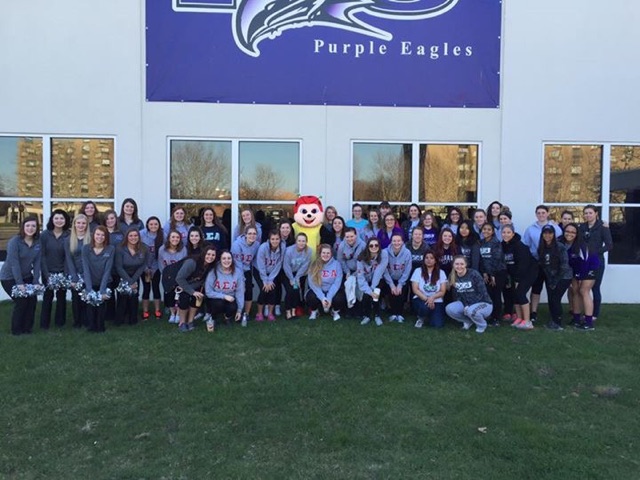 Supporters cheered as the athletes ran into the gym.

Many volunteers come out to support the athletes. One of the biggest supporters of the Special Olympics is Niagara University Alpha Sigma Alpha, Zeta Chi chapter. This sorority has approximately 40 girls who are dedicated in making a difference. The Special Olympics is one of many of the sorority's philanthropies they participate in year-round.

The president of Alpha Sigma Alpha, Dana DiMatteo, explains her experience as "inspiring" and "so incredibly rewarding." Dana goes on to say, "My favorite part of the Special Olympics is cheering the athletes on their way into the event. The excitement they have is exhilarating." 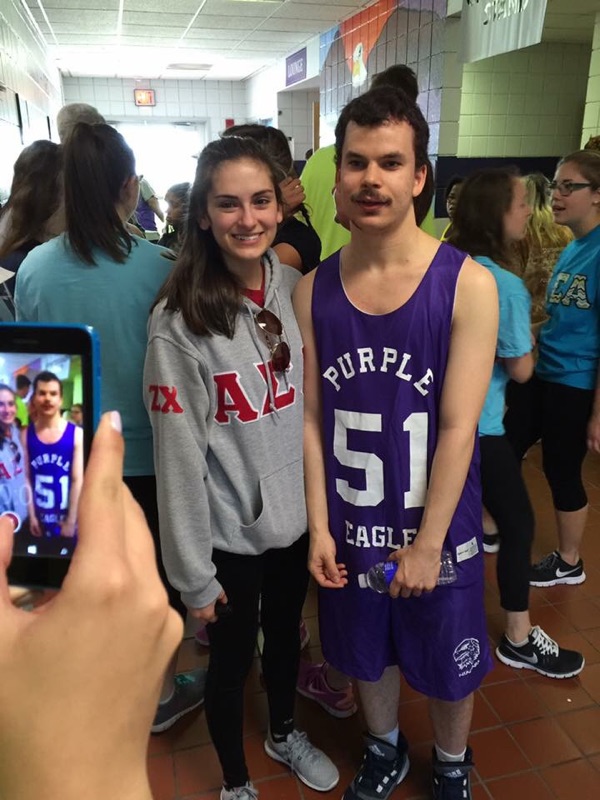 Once inside, the family, friends and supporters all meet to wait for the athletes in the main gym so they can run through with their teams. After each team was announced, the torch was lit and brought through the crowd.

Watch: The lit torch being brought to the starting line:

Every year, an athlete is chosen to start the games. Once the words "Let the games begin" have been said, everyone cheers and the games start.

Since there are so many athletes, both gyms are utilized, so everyone isn't crammed into one and the athletes don't have to wait until it's their team's turn to play.

In the other gym, there are tables set up for the athletes and their friends and family to make crafts and have lunch. There is also a dance floor set up where music is played and the athletes can dance with one another.

The banner made for the second gym. 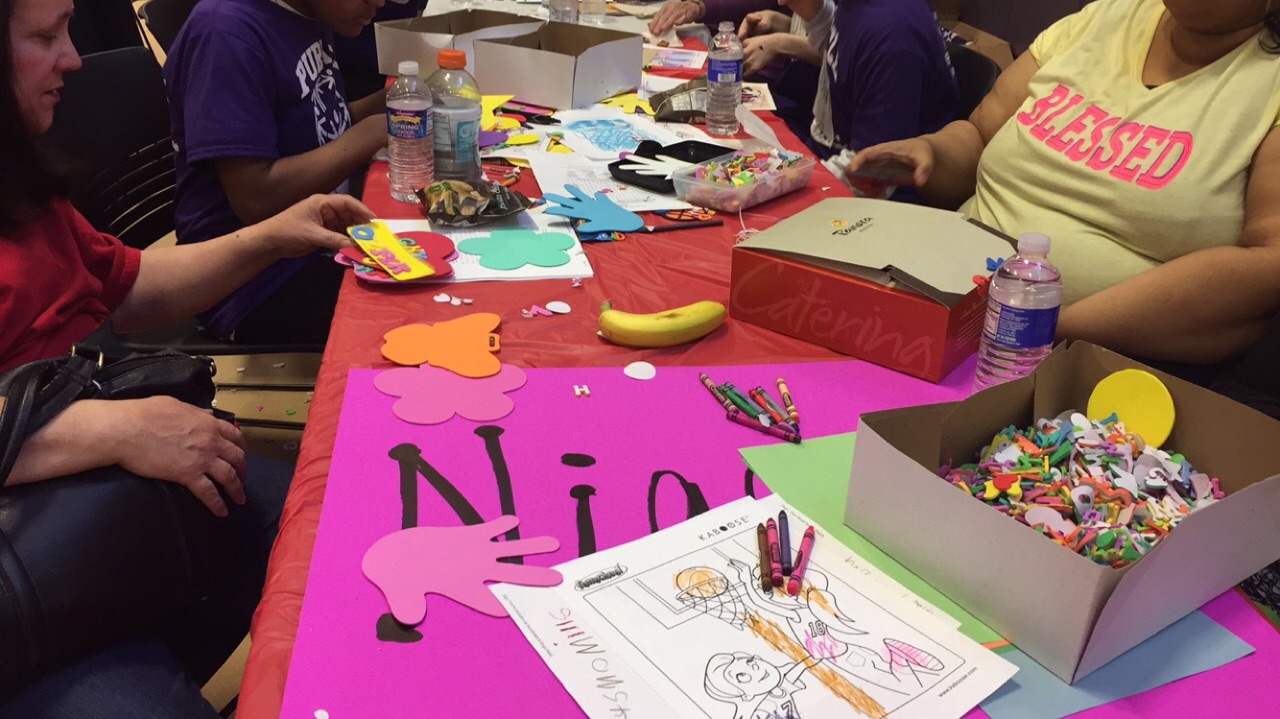 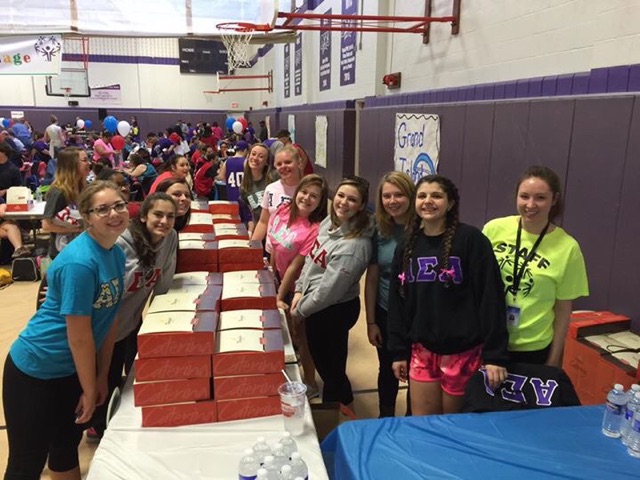 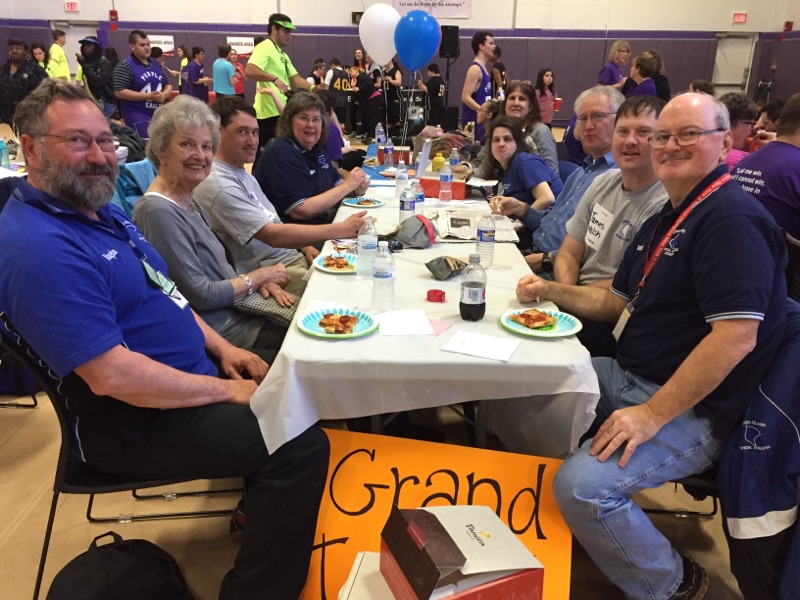 Supporters and athletes having lunch together in the Olympic Village.

Watch: One Alpha Sigma Alpha members dancing with some athletes:

If athletes weren't in the Olympic Village, they were in the main gym playing basketball together or showing off specific skills they learned. Some of the different stations for specific skills were a dribbling station, shooting station and a target practice station.

At each station, there are students who help the athletes and guide them when rotating. These students take a class learning all about the Special Olympics and what the organization entails. There are a lot of girls in Alpha Sigma Alpha who are in the class as a student, as well. Many of the girls fall in love with Special Olympics, so they try their hardest to get into the class so they can be even more involved.

Sydney Metzger, a member of Alpha Sigma Alpha, says, "After volunteering for Special Olympics through Alpha Sigma Alpha for the past two years, I fell in love with the athletes and what the program stands for. I loved it so much that I decided to take the next step and get more involved by signing up for the class offered by NU."

By doing so Sydney was able to become a coach for the Western New York region for the athletes. Sydney goes on to say, "I did this to help the athletes, but they were the ones that ended up helping me by giving me one of the most rewarding experiences of my life."

The Chautauqua Lakers after their basketball games.

The week leading up to the Special Olympic events, the Alpha Sigma Alpha members were table sitting in Gallagher, a main meeting space for a lot of students and faculty on campus, to have people sign their name on the signs they had made. When someone signed the sign, they were pledging to end the use of the "R" word. When people signed, they also had an option to donate money to Special Olympics. 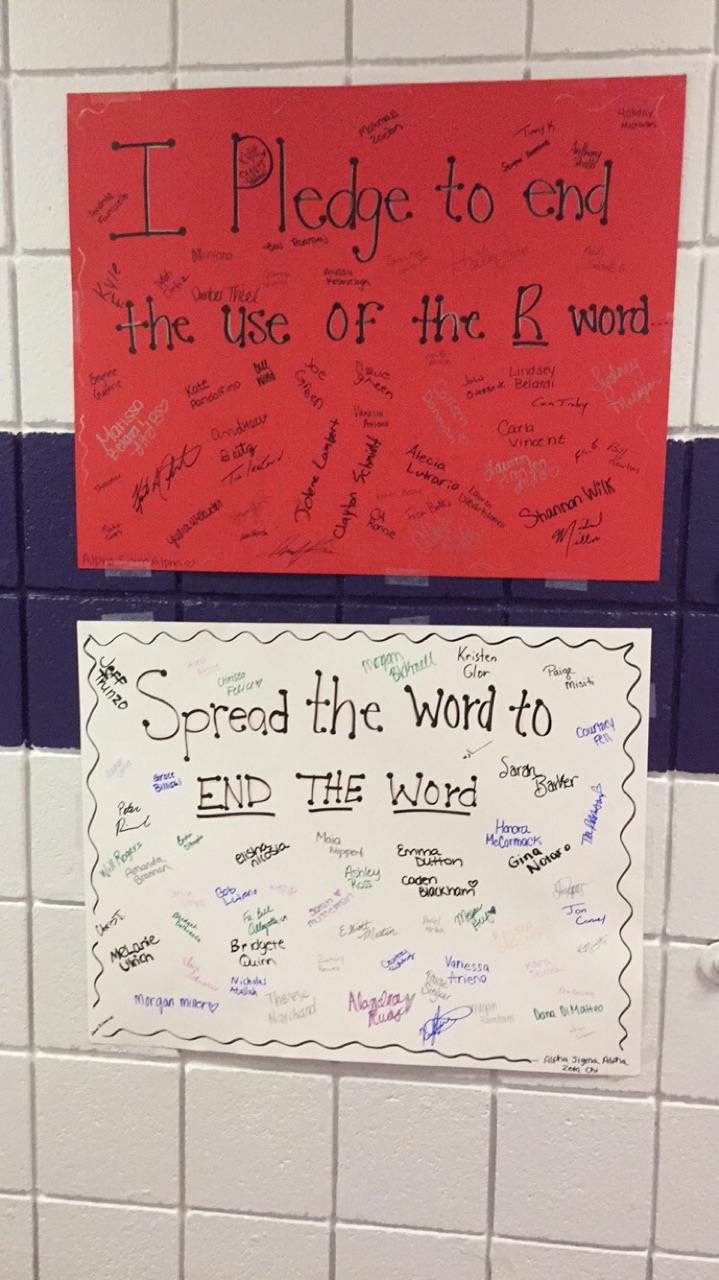 "Spread the Word to End the Word."

Throughout the week, the Alpha Sigma Alpha members had three huge signs filled with names to display at the Special Olympics events.

Another thing the ladies of Alpha Sigma Alpha did was have a bake sale. Members made baked goods to sell during the event. They also had pizza and water to sell, as well.

All of the proceeds went right to the Special Olympics. The ladies ended up raising over $400 between the bake sale and donations they received.

Another really cool thing the Alpha Sigma Alpha ladies do is dress up as their mascot Dot the Ladybug. They take turns rotating in and out of the costume and walk around, cheer on the athletes, and dance with the athletes to make them happy. 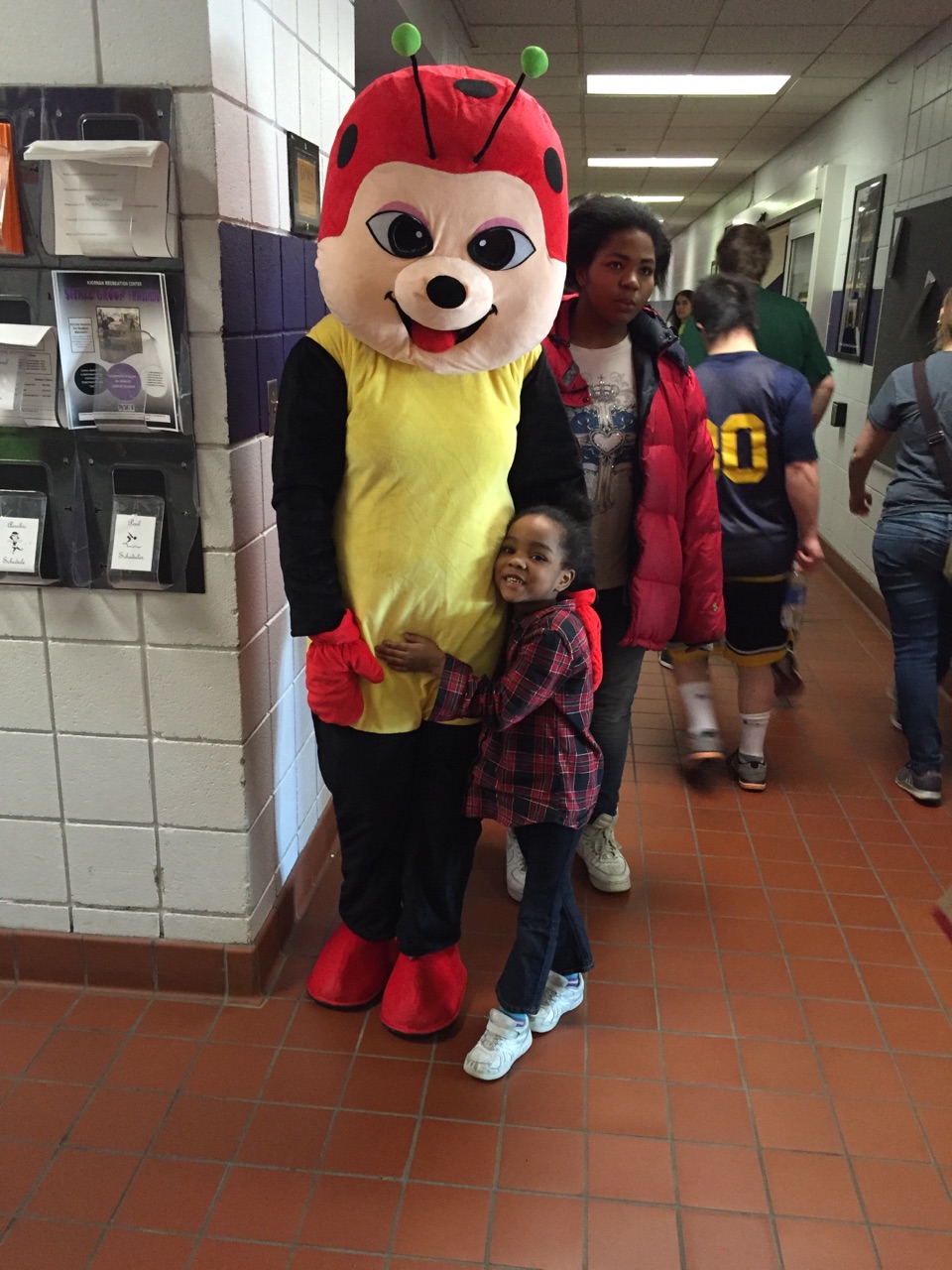 Dot has made a new friend. 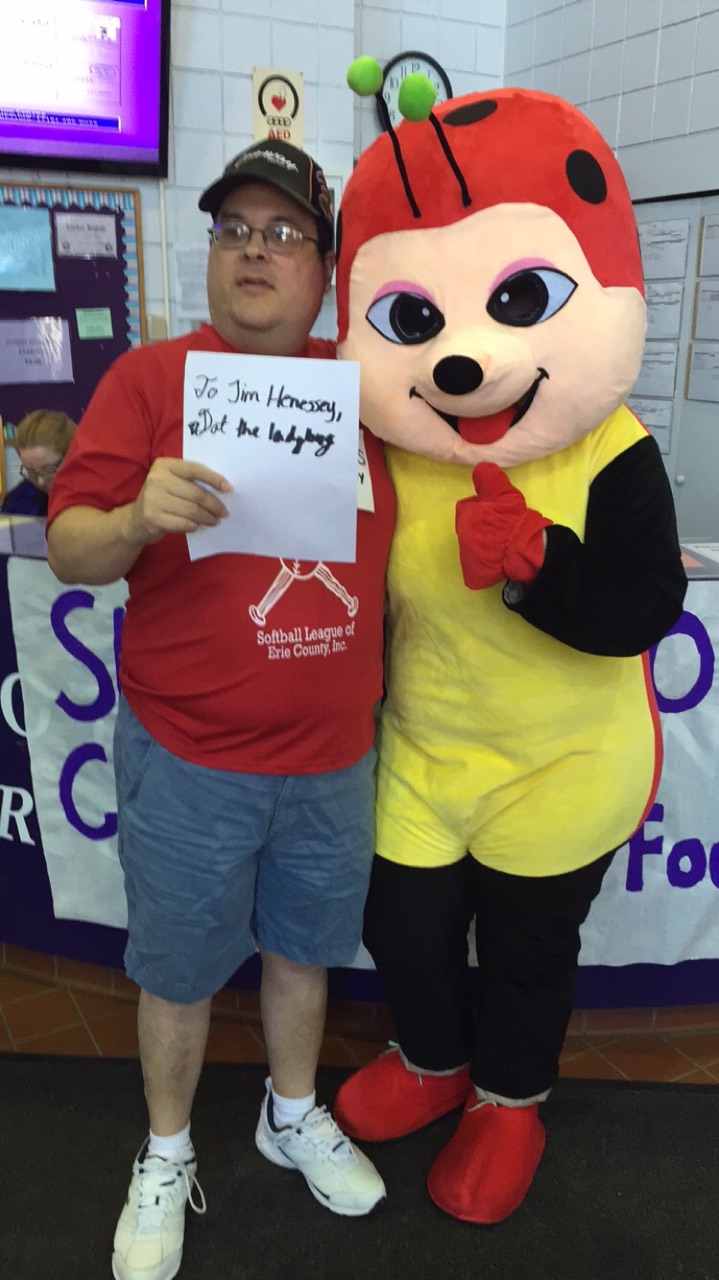 Watch: Dot dancing to the music:

For more information on the Special Olympics, CLICK HERE.