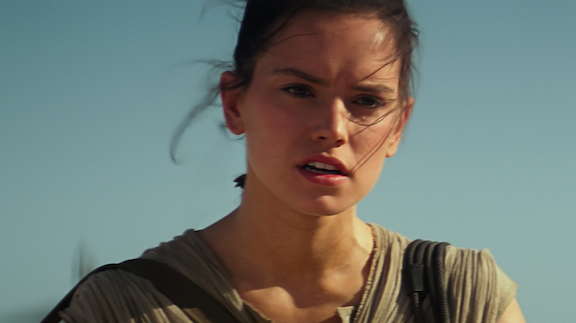 •How Does Daily compare her experiences filming the 2015 blockbuster and "Episode VIII," which is currently in production: "They are two very different things. 'Episode VII' was like the beginning of the whole thing, and it was terrifying and incredibly rewarding, and I felt like I pushed myself beyond boundaries I thought I had. And now (on 'Episode VIII'), I feel more together and I feel more present"

•If Daisy could tell her younger self one thing it would be ...: "Just keep doing what you are doing, because everything happens for a reason"

•Coffee or tea? Tea - Green tea with honey. Coffee makes her more jittery and she is already a jittery person

•Fomo Alert! - Although the actress confessed that she never found it hard to keep the movie details a secret, she did admit to fomo! It affected her so bad that she used to like going to set even when she was not filming to see what was happening

•Daisy on her "love to hate" relationship with working out: Who knew that this badass actress had bad wrists - so bad that she couldn't do push-ups?! Although she won't be seen doing curls, you might catch her doing sprints around town. She hates running, because she feels like her brain is rattling off in difference directions. But she loves it, too, because she always feels powerful.