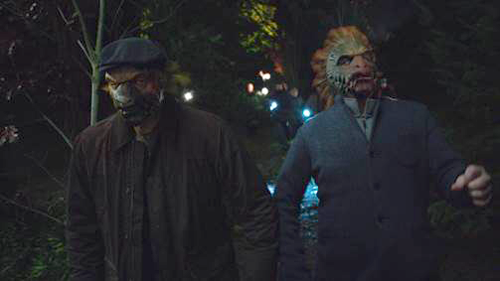 NBC and "Grimm" will celebrate Jessica Short's winning Wesen creature by having it appear in the 100th episode of the series on Friday, March 11 (9 p.m. ET/PT).

Short, of Brooklyn, submitted her winning Wesen creature named Wettbewerbsgewinner, along with other fan entries into the Tumblr promotion "#Grimme Your Best Shot" held last fall and timed to the filming of the 100th milestone episode. The entries were judged and the winner was selected by the producers of the show.

Executive producers David Greenwalt and Jim Kouf said, "For our 100th episode, we wanted to give back to the fans and have them participate by creating a Wesen. We chose this submission because of its unique artwork and her clear passion for the show. This Wesen fits into the 'Grimm' world seamlessly and her style is similar to that of the conceptual artists on the show.

"Thanks to all of our fans who participated. We enjoyed looking at all your submissions."

On "Grimm's" 100th episode, Nick (David Giuntoli) and Monroe (Silas Weir Mitchell) find a treasure in Germany that has been hidden for centuries. Back in Portland, Capt. Renard (Sasha Roiz) joins Hank (Russell Hornsby) and Wu (Reggie Lee) to track down a deadly assassin who has thrown Portland into havoc. Little do they know that Eve (Bitsie Tulloch) is on a hunt of her own for the same man. Meanwhile, someone from Rosalee's (Bree Turner) past tracks her down.