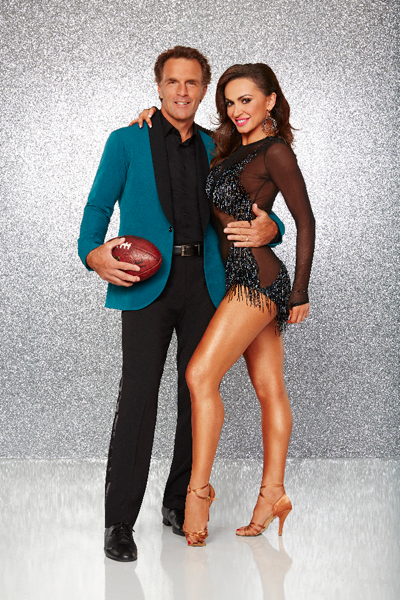 ABC announces this season's 'Dancing with the Stars' celebrity cast

'Dancing with the Stars' returns with a live premiere Monday, March 21

The celebrity cast members of "Dancing with the Stars" are slipping into their ballroom shoes and getting ready for their first dance on Monday, March 21 (8-10:01 p.m. EDT), on the ABC Television Network. The 22nd season's lineup of celebrity dancers includes a multiplatinum-selling recording artist, a Peabody Award winner, a UFC fighter and Super Bowl 50's MVP, to name a few.

Hosted by two-time Emmy Award-winning host Tom Bergeron and Erin Andrews, "Dancing with the Stars" is the hit series in which celebrities perform choreographed dance routines that are judged by a panel of renowned ballroom experts: head judge Len Goodman and dancers/choreographers Bruno Tonioli and Carrie Ann Inaba.

As announced this morning on ABC's "Good Morning America," the celebrities with their professional partners heading to the ballroom this season (in alphabetical order) are:

MISCHA BARTON began her successful film, television and stage career in the New York theater scene under the tutelage of esteemed director/writers James Lapine ("Twelve Dreams" at Lincoln Center with Donna Murphy), Tony Kushner ("Slavs!" at New York Theater Workshop with Marisa Tomei), and Naomi Wallace ("One Flea Spare" at the Public Theatre with Dianne Wiest.) She has since gone on to star alongside screen icons Julia Roberts and Hugh Grant in "Notting Hill," Bruce Willis and Toni Collette in "The Sixth Sense" and Sam Rockwell in the Sundance critically acclaimed film "Lawn Dogs." She is currently in production on the independent film "Father." On television, for three seasons, Barton portrayed Marisa Cooper on FOX's wildly popular drama "The O.C." The show earned several awards, including a Television Critics Association Award nomination for Outstanding New Program of the Year. Barton also starred in The CW drama series "The Beautiful Life."

ANTONIO BROWN is an NFL wide receiver and punt returner for the Pittsburgh Steelers. He was drafted in 2010 after playing college football for three years at Central Michigan, where he was named a first-team All-American by The Sporting News in 2008 and 2009. The four-time Pro-Bowl selectee was named the Pittsburgh Steelers MVP in 2011, 2013 and 2015. Brown also received the honor of the AFC Offensive Player of the Year in 2014 and was named the Fantasy Player of the Year for the 2015-16 season. Brown grew up in Miami and resides in Pittsburgh.

NYLE DIMARCO is an actor, model and spokesman. He is a native New Yorker and was born into a large multigenerational deaf family. He is an alumnus of Gallaudet University, the only liberal arts university in the world for the deaf. DiMarco was the standout star and winner of "America's Next Top Model's" cycle 22. He has gained a lot of attention for being the first deaf contestant. Next, Nyle will appear on "Difficult People," opposite Billy Eichner and John Early. Previously, he recurs on "Switched at Birth" as Garrett. DiMarco is deaf and uses American Sign Language.

KIM FIELDS is a true Renaissance woman of the entertainment industry. She is an accomplished actress, director, producer and writer. Her work spans decades, and transcends both genres and mediums to create quality entertainment. As an actress, Fields is best known for her starring roles in two iconic shows: "Living Single" and "The Facts Of Life." Fields has also appeared on many other film and television projects, including HBO's "The Comeback;" TBS's "Meet the Browns," Lifetime's "The Division" and "Strong Medicine," and A&E's "The Cleaner." More recently, she joined the cast of Bravo's "The Real Housewives of Atlanta." Additional recent roles include the television movie "A Cross to Bear," the film "What to Expect When You're Expecting" and Hallmark Channel's "For Better or for Worse." Fields starred in her third "Holiday Love" Christmas special, which she also produced, co-wrote and directed.

DOUG FLUTIE's name has been synonymous with excellence in both college and professional football, as he has received many honors, including All American at Boston College, 1984 College Football Player of the Year, the 1984 Heisman Trophy winner and 1991-1994, 1996, 1997 Grey Cup Most Valuable Player. Known for the famous "Hail Mary" pass against University of Miami to win the Orange Bowl in college, Flutie went on to play in the USFL and then the Chicago Bears and New England Patriots through the late 80s. He then played in the Canadian Football League for eight years, followed by the NFL's Buffalo Bills in 1998. There, he was selected to the NFL Pro Bowl. At the age of 38, Flutie signed a contract with the San Diego Chargers to become starting quarterback. After four seasons, he was offered the opportunity to finish his career with his hometown team, the New England Patriots. Currently, Flutie serves as lead analyst for NBC Sports Group's coverage of Notre Dame football. He also serves as an analyst for NBC Sports Group's NFL shoulder programming, which includes "Pro Football Talk" on NBCSN.

Doug is the drummer of the Flutie Brothers Band. He has also written an autobiography, titled "Flutie," recounting his life both on and off the field. Doug and his wife, Laurie, established the Doug Flutie, Jr. Foundation for Autism in 1998 in the name of their son, Dougie Jr., to help less-fortunate families who have children with autism. He also created a cereal, Flutie Flakes, with the benefits going toward this organization. The Flutie Foundation has raised over $12 million for autism causes.

MARLA MAPLES is a Broadway professional who starred in "The Will Rogers Follies" and "Love, Loss and What I Wore." A veteran host of "The Miss U.S.A. Pageant," "The Miss Universe Pageant," and co-host of "Fox After Breakfast" with Tom Bergeron, Maples is also a philanthropist on a mission, an actress and musical artist. Her single "House of Love," off her album "The Endless," features Deepak Chopra and LogiQ Pryce. It won the Hollywood Music in Media Award (HMMA) for best song in the ambient/new age category. Maples has appeared in more than 15 films and has guest-starred in numerous television series. Maples was married to Donald Trump and is a proud mom to daughter Tiffany Trump, who is graduating this spring from University of Pennsylvania.

VON MILLER, the Denver Broncos star linebacker, was named MVP of Super Bowl 50. He was the 10th defensive player to earn the honor after posting 2.5 sacks, two forced fumbles, one pass defense and six tackles (five solo). A fifth-year linebacker and four-time Pro Bowl selection, Miller's 60 career sacks through his first five seasons represent the sixth-most in NFL history. In 2015, Miller was selected to his fourth Pro Bowl, joining Hall of Fame running back Floyd Little and Ring of Fame safety Steve Atwater as the only players in team history to make at least four Pro Bowls in their first five years with the team. In 2012, he started Von's Vision, a foundation dedicated to providing eye care and glasses to underprivileged youth. His foundation now has Von's Vision Days, where these youth can receive eye exams and glasses onsite in the same day.

WANYA MORRIS first rose to fame as an original member of the R&B group Boyz II Men (which would go on to become the bestselling R&B group of all time with an astounding 64 million albums sold), when he was just a high school student at the Philadelphia School of Creative and Performing Arts. As the group's second tenor, Morris has helped the band achieve international renown over the past two-and-a-half decades - while creating some of the most iconic albums in music history, including, "II" (1994), "Evolution" (2007), "A Journey Through Hitsville USA" (2007), "Love" (2009), "Twenty" (2011) and "Collide" (2014). Morris and group members Nathan Morris and Shawn Stockman have won four Grammy Awards, nine American Music Awards, nine Soul Train Awards, three Billboard Awards, and a 2011 MOBO Award for Outstanding Contribution to Music. Most recently, Boyz II Men were featured on FOX's "Grease Live" as the teen angels who sing "Beauty School Dropout," which became the most tweeted moment of the show with 9,350 tweets. They also appeared on "The Late Late Show with James Corden" for the Super Bowl 50 aftershow to parody one of their well-known songs, "End of The Road."

GERALDO RIVERA is one of media's most enduring broadcasters. The Emmy and Peabody award-winning journalist is a Fox News senior correspondent and host of breaking news specials the "Geraldo Rivera Reports." He is a rotating co-host on the FOX News Channel's hit program "The Five" (weekdays 5-6 p.m. EST) and provides regular reports and commentary on FNC's "Fox and Friends," "Hannity" and "The O'Reilly Factor." He joined the network in 2001 as a war correspondent following the 9/11 attacks. Before becoming a member of the original cast of ABC's "Good Morning America," Rivera presented the first television broadcast of the infamous Abraham Zapruder film of the assassination of President John Kennedy as host of ABC's "Good Night America." He then began an eight-year association with ABC's "20/20" as an investigative reporter. In 1987, Rivera began producing and hosting "The Geraldo Rivera Show," which lasted 11 years. In 1998, he hosted a series of investigative specials on NBC. Rivera also appeared on "The Celebrity Apprentice."

JODIE SWEETIN is an entrepreneur, actress and author who garnered the love of millions in her role as Stephanie Tanner on ABC's long-running, hugely popular sitcom "Full House," which still airs in syndication. Currently, Sweetin is working on the spinoff, "Fuller House," which was recently picked up for season two on Netflix. In 2009, Sweetin published her memoir, "UnSweetined," documenting her life growing up in the spotlight and the years after. She wrote the book as a means to show that she was human, had faults, but most importantly, she had strength and courage. In sharing her story, Sweetin said she hoped to help others confront their issues head-on and move forward.

PAIGE VANZANT, also known as "12 Gauge," is the youngest and one of the most popular fighters in the UFC. With a record of 6-2-0, she is one of the most exciting fighters in the UFC, and is currently a top-ranked contender in the women's straw-weight division. VanZant grew up dancing in Dayton, Oregon, where her parents owned a dance studio. After some very difficult instances in which she was badly bullied in school, she came across MMA legend Ken Shamrock's gym. There, she trained in both boxing and MMA. VanZant turned pro on June 30, 2012, and signed with UFC in December 2012. Last Dec. 10, VanZant became the first female straw-weight to headline a UFC event. She is one of a select group of UFC stars to have an endorsement deal as a Reebok athlete (alongside Rhonda Rousey, Holly Holm, Connor McGregor and Jon Jones).

GINGER ZEE is the Emmy Award-winning chief meteorologist on "Good Morning America." Previously, she was weather anchor for the weekend edition of "Good Morning America." Additionally, Zee reports across all ABC News broadcasts and digital platforms and also serves as chief meteorologist for ABC News. Since joining ABC News, Zee has covered almost every major weather event and dozens of historic storms. She broadcasted from the devastated Jersey Shore during Hurricane Sandy, the Colorado floods and wildfires, and covered the wreckage from tornados in Moore and El Reno, Oklahoma.