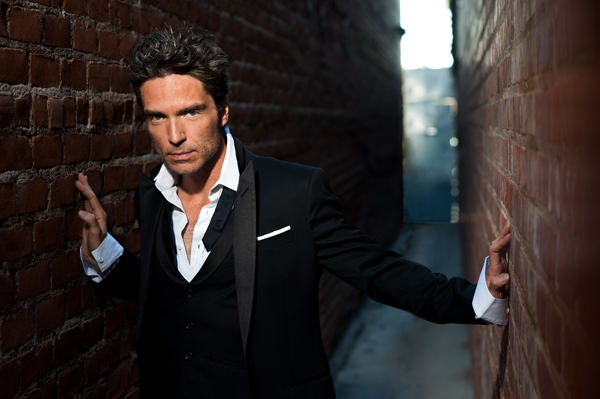 That is to say, the Richard Marx of yesteryear was a pop star who had a record seven consecutive singles reach the top 5 on the Billboard Hot 100, toured the world incessantly and sported giant '80s hair. The Richard Marx of today is a hit songwriter - for other people. He doesn't care about winning at radio, and his current fashion statement is model, actress and new wife Daisy Fuentes on his arm.

The singer, 52, who filled arenas, whose image plastered the walls of myriad teenage girls, is relishing his time behind the scenes these days. Just recently he posted on Facebook, "After more than 30 years, I am still nothing short of gratefully amazed by the phenomenon of creating something from absolutely nothing."

"I love playing live. I love it - now more than ever. But, it has never been as exciting or as rewarding for me as creating music," Marx said in a phone interview last week. "And there's the word. It's the difference between creating music and recreating music. So when I'm on stage, even if I'm doing a different arrangement or I'm trying out a little something different for a ... verse on this hit, it's still recreating the music that I created. As opposed to (creating).

"When I wrote that quote, actually, I was in Nashville for a couple days doing some writing. And I hadn't been there just to write songs in a while. I had done that pretty regularly over the past dozen years. So I went ... and I wrote some ... really good songs over three days.

"But that morning, I wrote with these two songwriters, Ross Copperman and Ashley Gorley, and they're both very successful songwriters. We never met before, and we weren't even sure what we were going to write, or what it was for. We just got together to write. And, 9:30 in the morning, we walk into a little music room and, within 15 minutes, we were working on this song - which became my favorite song I've been a part of in a long time. And I've listened to this demo now, it's like 44 times; I can't listen to it enough."

"There came a point when it was easier and easier," to walk away from the limelight, Marx said, "because I was very aware that my tenure, if you will, on the charts had seen its peak.

"And I was young enough that I still was really into making music. And so, when my 11- or 12-year run of everything I put out got on the radio and sold and all that, and then I put out an album that, all of a sudden, didn't do that well, I realized that, 99 percent of artists' careers, there's a beginning, a middle and a peak.

"Then, it's like, if you're lucky like I am, you can tour for the rest of your life. Once in a while, maybe, you'll have a song that gets on the radio. But you can't even chase that. If you're going to continue to chase that, I think that that's delusional. So, I just reorganized my attention and my efforts into not having to be about me. And just wanting to create music for everybody - for anyone."

In fact, Marx said, "I don't get precious with (songs). If I write a song today that I think is a huge hit song, the likelihood is that I'm going to send it to somebody else, or I'm going to call around and see who's looking for songs. The first thought is not, 'Oh, I'm going to record this.' ... Because I'm not really on the radio. It doesn't mean I couldn't be with the right song, but I just don't chase that. ... It's like, I had such a great run on the charts, and I got to experience all of that stuff. ... And now, it's like I just want to serve the music. I want the music to be the most successful it can be."

Still, Marx does tour occasionally. He reads fan comments that suggest his music is "the soundtrack of their lives." (Think: "Hold On To The Nights," "Right Here Waiting," "Endless Summer Nights," "Should've Known Better" and, yes, "Don't Mean Nothing.") That kind of support is "the No. 1 reason that I still go do shows," Marx said. "There's a chemistry and an energy between me and the audience. ...

"It's such a special thing. It's not work. Especially the solo acoustic shows that I've been doing the last few years. ... It's just me and the audience. It's just us."

"I never do all the hits, because, luckily, I can't. It would be too long a show, which is a great problem to have," Marx said. "But I load the set with hits. And, what's really fun, is I now put in at least two or three songs that I wrote for other people."

He explained, "The show is what happens in between the songs. I get to hang out with these people that have supported my career, who have been touched by the songs that I've written. And we get to spend time together. It's not just them sitting and listening. They could stay home and listen to the record. It's got to be an interactive thing where it's what happens in between the songs. ...

"I get it. I look at the social media sometimes. I look at comments. I appreciate what these people (say). People who just come up to me on the street or in a restaurant, these people have said some of the most beautiful things to me about how something I've made up for my own selfish purposes affected their lives.

"And I've had that experience with other musicians, too. I got to tell Peter Gabriel how much his music meant to me. I got to do that with a couple people that were influences on me or made an impact on my life.

"So, it's unbelievable. It's remarkable. And the fact that it's global - I have these conversations with people in Australia or in China - or in Wichita, Kansas. It's quite a privilege." 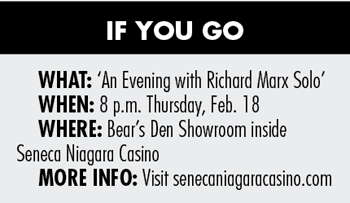