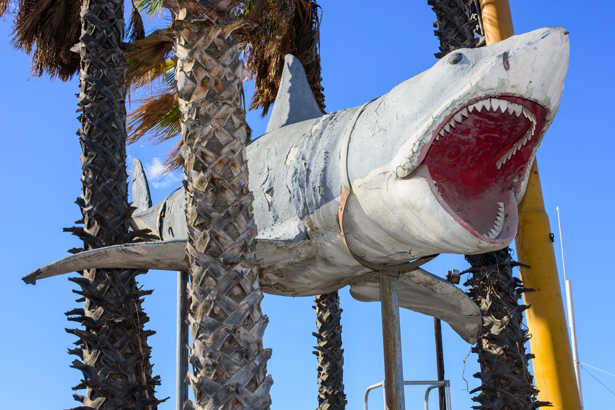 The Academy Museum accepted into its collection a major gift of the sole surviving full-scale model of the 1975 "Jaws" shark, donated by Nathan Adlen. (Contributed photo)

The Academy Museum announced today it accepted into its collection a major gift of the sole surviving full-scale model of the 1975 "Jaws" shark, donated by Nathan Adlen.

The monumental Fiberglas model is the fourth and final version made from the original mold. Created for display at the Universal Studios Hollywood at the time of the film's release, the prop remained a popular backdrop for photos until 1990, when it was moved to the yard of Adlen Brothers Auto Wrecking, a firm in Sun Valley, California, that regularly bought or hauled used vehicles from Universal Studios. With the business slated to close this month, owner Adlen made the generous gift of the historic prop to the Academy Museum.

The shark model will join the museum's unmatched holdings - including an underwater apparatus and fin used in "Jaws" and "Jaws II" - as the largest object to enter the Academy Museum's collection to date.

Kerry Brougher, director of the Academy Museum, said, " 'Jaws' was the original summer blockbuster - a movie that marked a turning point in culture and society - and Bruce is the only surviving version of its unforgettable central prop. This extraordinary addition to our collection, made possible through the generosity of Nathan Adlen, is a major contribution to the resources we will use to illuminate film history and enhance the public's understanding of the arts and sciences of motion pictures."

Directed by Steven Spielberg and based on the 1974 Peter Benchley novel, "Jaws" was an immediate critical and commercial success, and was selected by the Library of Congress in 2001 for preservation in the United States National Film Registry as a work of utmost cultural, historical and aesthetic significance. The creation of the film's mechanical shark - which Spielberg named Bruce after his lawyer, Bruce Ramer - was undertaken by art director Joe Alves, who designed a prop with a 25-foot-long body, 400-pound head and jaws nearly five feet wide. The mold yielded three latex and rubber casts that were used in production.

Following the film's release, the three rubber casts deteriorated and were discarded. But the fourth cast, made of Fiberglas for promotional use, has survived. In 2010, Roy Arbogast, a member of the film's special effects crew, authenticated it.

"I am delighted to be part of the new Academy Museum through the gift of this beloved American icon," Adlen said. "Bruce caught the eye of my father, Sam Adlen, at first glance back in 1990, and for many years he's been like a member of the family. And the May Company building, where the museum is being created, feels like part of the family, too, since I grew up in the Miracle Mile district and shopped with my parents at the May Company, where my wife even had a part-time job. This is going to be the perfect place to share this extraordinary treasure with the world."

The Academy of Motion Picture Arts and Sciences is the world's most prominent collector of moving image history, having acquired and preserved movie-related materials since the 1930s. In developing its highly immersive exhibitions, the Academy Museum will draw on materials that include approximately 62,000 pieces of production art - such as a "Planet of the Apes" mask, a model horse head made for "The Godfather" and the lion's mane and ruby slippers from "The Wizard of Oz" - as well as some 12 million photographs, 55,000 posters, 80,000 screenplays, prints of 80,000 films and tens of thousands of books, periodicals, items of correspondence, scrapbooks and clippings files.