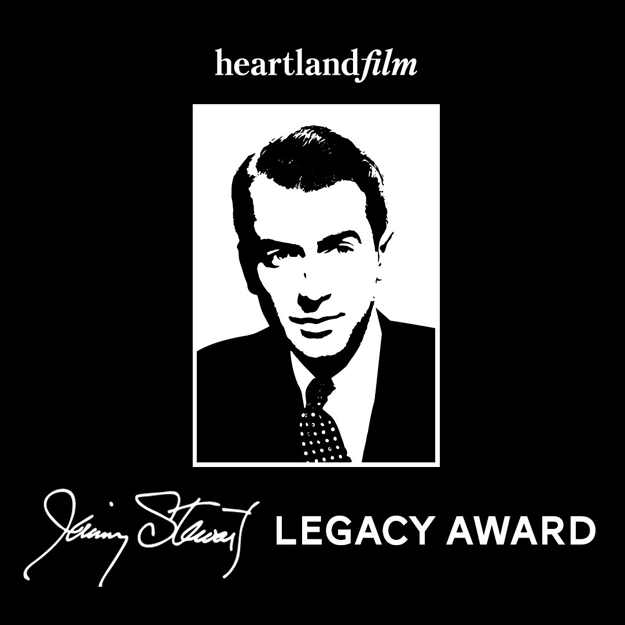 Saturday night, at a special screening of "It's a Wonderful Life" at The Athenaeum, Kelly Stewart accepted the Pioneering Spirit Award - Heartland Film's lifetime achievement honor - on behalf of the Stewart family and her late father, beloved actor Jimmy Stewart. She was then joined by Heartland Film President Stuart Lowry to announce the all-new Jimmy Stewart Legacy Award, set to debut at the 25th annual Heartland Film Festival (Oct. 21-30, 2016).

The annual Jimmy Stewart Legacy Award will include a $5,000 cash prize for a single winner, selected from the festival's feature-length narrative and documentary titles. The winning film will best embody the ongoing legacy of actor and national hero Jimmy Stewart and will demonstrate the triumph of the human spirit through determination and the defiance of odds, humble vulnerability, and courage in the face of adversity.

"There's no better way to kick off the Heartland Film Festival's silver anniversary than the announcement of this award in honor of silver screen legend Jimmy Stewart," Lowry said. "Stewart inspired millions of people, on and off the screen, and we know the films chosen for this award will do the same. We sincerely appreciate the support of the Stewart family and Lilly Endowment Inc. for making this new award possible."

"Our family is deeply honored by the creation of the Jimmy Stewart Legacy Award and we thank Heartland Film and Lilly Endowment Inc. for making it possible," the family said. "We have no doubt that it will foster the sorts of films our father is beloved for - films that help us believe in the finer qualities of human nature, through characters we can almost touch. Our father would be very proud, as are we, his family."

Funding for the Jimmy Stewart Legacy Award is made possible by Lilly Endowment Inc. as part of a $5 million grant announced earlier this month to support Heartland Film's operations and future sustainability. Beyond the Jimmy Stewart Legacy Award, the other Heartland Film Festival awards endowed through the grant include the Grand Prize for Best Documentary Feature, Grand Prize for Best Animated Short Film, Best Premiere Narrative Feature and Indiana Spotlight.

Every October, the Heartland Film Festival gives its moviegoers access to more than 100 visiting independent filmmakers from all over the world, right in the heart of the Midwest. The festival showcases more than 130 entertaining movies that do more than just entertain over 10 days of red carpet premieres and events, parties and hundreds of film screenings across Indianapolis.

Heartland Film is a nonprofit arts organization founded in 1991 with the mission to inspire filmmakers and audiences through the transformative power of film. Heartland Film is a curator and supporter of purposeful filmmaking, honoring a wide variety of cinema and awarding storytellers from all over the world.

The films Heartland Film selects and exhibits - whether they inspire and uplift, educate and inform, or have the ability to shift audiences' perspectives on the world - all have one thing in common: They are entertaining films that do more than just entertain.