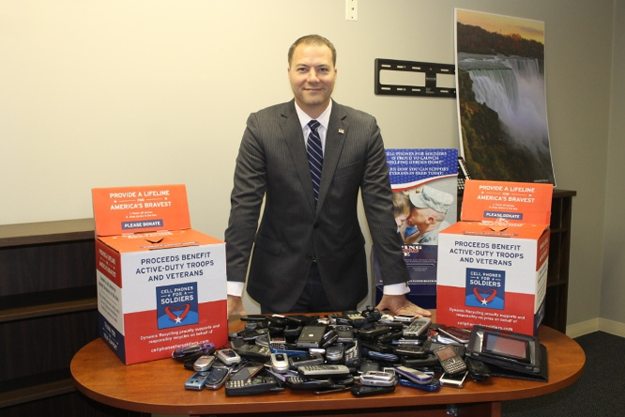 In time for the holidays, more than 900 donated cell phones will help provide calling cards for deployed troops and veterans

Just in time for the holidays, state Sen. Robert Ortt, AT&T and Niagara County Veterans Service Agency are proud to announce that, with the help of the community, more than 900 gently used mobile devices have been collected over the past month and are being donated to Cell Phones For Soldiers.

The collection drive spanned Ortt's district with more than 10 collection bins in public locations and at all AT&T stores located throughout the region. Proceeds from the recycled devices will be used to buy long-distance calling cards for troops abroad and veterans at home so they can call their loved ones this holiday season.

For every donated phone valued at just $5, Cell Phones For Soldiers is able to provide two and a half hours of free talk time to deployed troops through calling cards. By donating more than 900 mobile devices to Cell Phones For Soldiers, Ortt, AT&T, Niagara County Veterans Service Agency and the community are providing troops and veterans with approximately 40,000 minutes of free calls with loved ones back home.

"Western New York residents have overwhelmingly shown their support for our troops overseas through this worthy cause," Ortt said. "Several hundred cell phones have been donated by community members, demonstrating their commitment to helping others and their dedication to keeping our military men and women connected to their loved ones by easing their financial burden. I'm proud of our Western New York community and partners at Cell Phones For Soldiers, AT&T and Niagara County Veterans Service Agency for helping to honor our servicemen and women through this vital initiative."

Cell Phones For Soldiers was founded in 2004 by teenagers Robbie and Brittany Bergquist at the ages of 12 and 13 after they heard the story of a local soldier with an almost $8,000 cell phone bill. They decided to help this one man with just $21 of their own money.

Cell Phones For Soldiers was born from there.

The charity has since provided more than 216 million minutes of free talk time to service men and women stationed around the world through its calling card program, Minutes That Matter. Funds raised from the recycling of cellular phones are used to purchase prepaid international calling cards. On average, Cell Phones For Soldiers distributes 1,500 calling cards each week to bases around the world, care package programs, deployment ceremonies and VA hospitals.

"At AT&T, we provide solutions to better connect the world, but nothing brings us more pride and joy than being able to connect our active military and veterans with their loved ones - especially during the holidays," said Marissa Shorenstein, New York president of AT&T. "I applaud Sen. Ortt and Niagara County Veterans Service Agency for leading this community collection drive with AT&T, and I thank everyone that donated a mobile device. Their generosity will make the holidays more enjoyable for some of America's bravest men and women and their families."

Niagara County Veterans Service Agency Director Nina Cabrera said, "The generosity people show for our troops and veterans, especially during the holiday season, never ceases to amaze me. Niagara County Veterans Agency is proud to have been a part of this community effort for deployed military members and veterans at home. The outpouring of support from dozens of people donating to the collection drive is heartening, and is a true testament to how much we care for America's bravest."

Since 2004, more than 11.7 million phones have been recycled or repurposed. Approximately half of the phones processed are reconditioned and reused. Phones and components that cannot be refurbished are dismantled and responsibly recycled to reclaim materials.

AT&T's ongoing support of Cell Phones For Soldiers stems from the company's longstanding mission to connect members of the nation's military and veterans with loved ones back home. AT&T has proudly supported Cell Phones For Soldiers' "Helping Heroes Home" initiative, a program designed to provide emergency funds for returning veterans to alleviate communication challenges as well as physical, emotional and assimilation hardships. Additionally, AT&T and its customers have donated more than $4.6 million and distributed more than 600,000 AT&T prepaid calling cards to service men and women overseas since 2007.