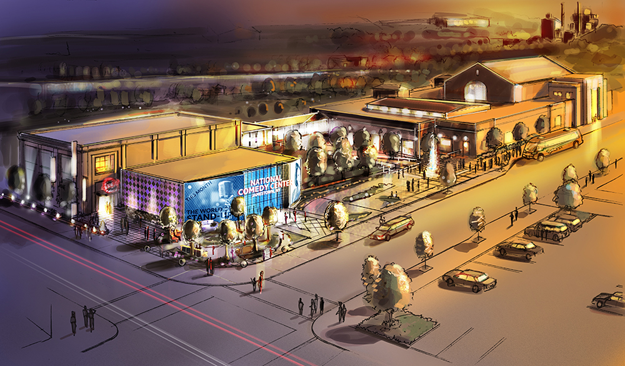 An artist's rendering of the National Comedy Center. (Contributed image)

Just four months ago, Jerry Seinfeld, the families of George Carlin, Harold Ramis, Joan Rivers and Milton Berle, along with Regis Philbin, the long-serving staff and crew of David Letterman's 33-year career, Nick Offerman and more than 20 other comedic artists descended on Jamestown during the weekend commencing construction of the first national attraction and cultural institution dedicated to comedy.

"These funds are part of the critical capstone for this $50 million project," said Journey Gunderson, National Comedy Center executive director. "This is a true public-private partnership, and comedy will now have the world-class celebration of artists and art form that is long overdue."

In the spring of this year, the organization also announced its partnership with Hologram USA to create a hologram comedy club theater as part of the National Comedy Center experience, projected to open in 2017.

The National Comedy Center is a 501(c)(3) nonprofit and embodies Lucille Ball's vision for her hometown of Jamestown. For additional information, visit www.NationalComedyCenter.org.