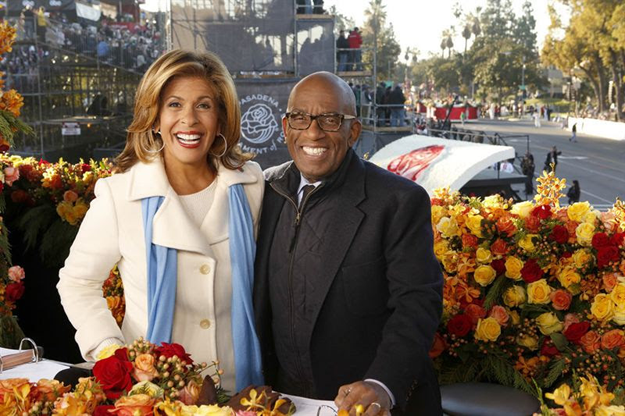 This will be Roker's 19th year hosting the popular annual event, and the third year for Kotb. NBC has been broadcasting the New Year's Day parade for 89 years, beginning on radio in 1927 and then televising the event beginning in 1954.

"Find Your Adventure" is the theme of this year's Rose Parade, the most popular New Year's Day celebration in the world. Renowned filmmaker Ken Burns, who has won 14 Emmy Awards, two Grammy Awards and received two Oscar nominations, is this year's grand marshal. Burns has directed and produced some of the most acclaimed historical documentaries ever made, about everything from the Civil War to baseball to the history of jazz.

The New Year's Day fun begins with a burst of fanfare and flowers in an exciting opening celebration by Honda featuring a lively swing band and daredevil sway pole artists gliding through the air.

Honda's "Nature's Hope" float, honoring the natural beauty of the national parks of Japan and the U.S., is the first of 44 lavish floats in the parade. Other notable entries include a Los Angeles Lakers float, celebrating the team's 68th year as a professional basketball franchise and the most wins in NBA history; and a "Sweet Shenanigans" float from Cal Poly Universities with larger-than-life gummy bears having fun against an ice cream landscape full of sweets.

Dole's "Soaring Over Paradise" entry will feature a zipline extending the full length of the float over a tropical rainforest complete with waterfalls, while Trader Joes' float celebrates its "Fearless Flyer," a flying man soaring 35 feet high and kept afloat by buoyant balloons.

The parade will also include Singpoli Group's entry celebrating the adventures of Marco Polo and featuring a spectacular fire-breathing dragon, and an incredible floral rendition of Mount Rushmore from the South Dakota Department of Tourism,

Adding to the fun will be 19 equestrian teams, including the world-famous Budweiser Clydesdale and a U.S. National Park Service team celebrating the 100th birthday of the National Park Service. The lively event also will feature 20 marching bands from as far away as Guatemala and Mexico, and include an acclaimed band from Allen, Texas, with more than 700 members. This year's Rose Queen and her court also will appear.

The Pasadena Police Department estimates more than 700,000 spectators will line the five-and-a-half mile parade route. Tens of millions of people worldwide watch the telecast every year.

Most affiliates will also broadcast NBC's optional coverage of the parade from 11-11:30 a.m.