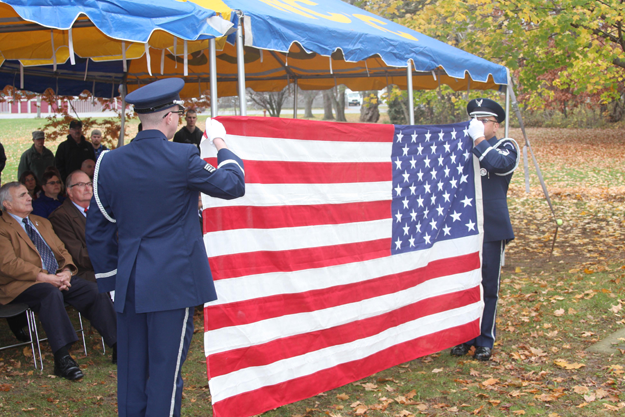 Members of Niagara Falls Air Base Honor Guard complete the American flag folding ceremony while explanations of its symbolism are explained to onlookers.

The annual ceremony included welcoming remarks by NCCC Board of Trustees Chairman James Ward. The student veteran speaker was Brandon A. Czerwinski, a sophomore in the business administration program and current president of the NCCC Student Veteran Association. He served in the U.S. Navy as a nuclear electronics technician for six years.

This year's keynote speaker was Ben Randle. He gave a moving speech on the selfless act of service. Randle is a combat wounded veteran who has served 35 years in public education as a teacher, principal and superintendent. He has also served more than 25 years in college education as an instructor and administrator. He is presently director of the veterans affairs office at D'Youville College.

Veterans Thomas Rutkowski and James Mezhir placed a wreath at NCCC Veterans Memorial Park monument to honor all who have served in the armed forces. Rutkowski now works in maintenance and Mezhir is division chair of humanities and social sciences at NCCC.

Members of the Niagara Falls Air Base Honor Guard presented colors, completed a flag folding ceremony, which included an explanation of the symbols on the American flag, and played taps.

Before concluding the ceremony, all veterans in the audience were invited to come to the microphone and give their name, branch and length of service, so the audience could honor them with applause.

More than 150 people were in attendance this year for the Veterans Day ceremony, which was open to the public.