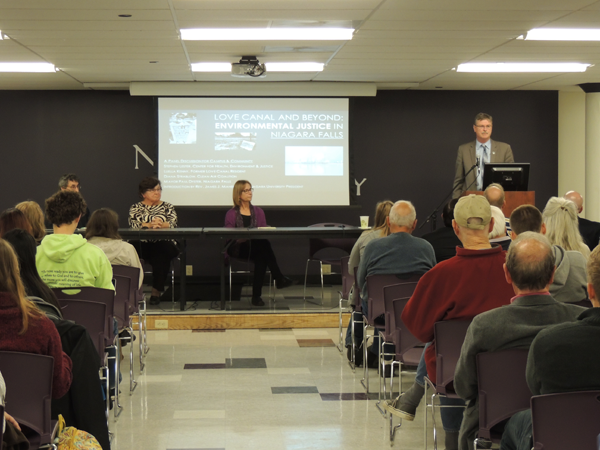 In the wake of Pope Francis' encyclical, Niagara University hosted a star-studded cast of environmental activists to speak about Love Canal at a panel discussion Thursday. Dr. David Reilly, chairman of international studies and political science at Niagara University, proudly assembled the event and attracted activists including Luelle Kenny of the Love Canal Homeowners Association, Steven Lester of the Center for Health and Environmental Justice and Niagara Falls Mayor Paul Dyster.

The discussion was kicked off by NU President the Rev. James Maher, who discussed how important issues of environmental justice have become to the Catholic Church.

Dyster followed, claiming the actions of past leaders have put Niagara Falls and the surrounding communities at risk to environmental catastrophes. However, Dyster did make a point to emphasize Niagara Falls has been making strides to clean up areas like Love Canal. He even went so far as to claim he would feel safe living close to the contaminated region, because it is "closely monitored."

Kenny, a former resident of the Love Canal neighborhood, openly expressed her disagreement with the mayor's opinion.

"Twenty-thousand tons of chemicals are still in Love Canal," she said. 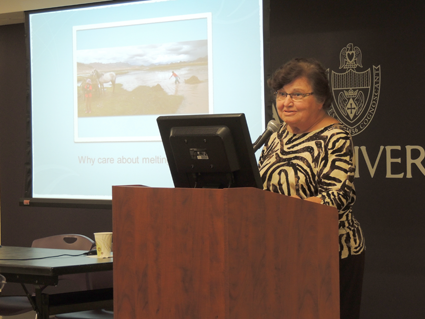 In 1978, Kenny's youngest son, John, passed away at the age of 7 as a result of kidney failure. Although state and local government officials denied his death had anything to do with the 32-parts-per-billion of dioxin in her backyard, Kenny and her husband had suspicions and set out to find what was behind their son's death.

Kenny discovered dioxin is a key component in the making of Agent Orange, a weapon used during Vietnam to destroy foliage and uncover enemy positions.

The hard-to-dispose-of dioxin was made in Niagara Falls, where loose environmental regulations on chemical companies in the 1960s lead to inappropriate dumping of toxic waste into Love Canal.

Kenny pointed out families who have attempted to buy houses near the site have left for the same reason that 200 families left over 30 years ago. Health problems such as birth defects, cancer and heart problems are just a few of the symptoms faced by Love Canal residents, she said.

The CHEJ was formed directly a result of Love Canal to help provide scientific facts to citizens experiencing disasters of similar nature.

Unfortunately with Love Canal, information did not serve the residents or the environment justice.

"Information is not power," Science Director of the CHEJ Steven Lester stated. "What you do with information is power."

"Everyone should know about Love Canal," Kenny stated. "It is an important part of history." 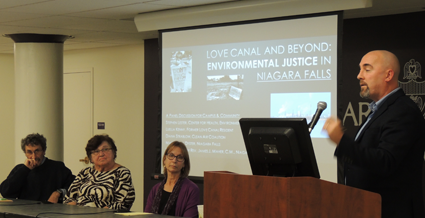