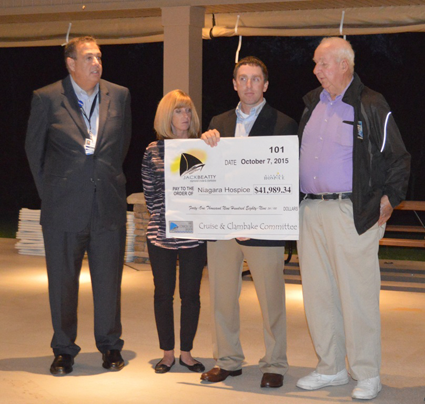 The Jack Beatty Memorial Cruise and Clambake, held July 10 to benefit Niagara Hospice, continued its tradition of entertainment, food and leisurely sailing and power boating in the lower Niagara River. Now in its 16th year, the event raised a record amount of $41,989.34, which was presented to Niagara Hospice on Wednesday.

The Youngstown Yacht Club was the setting for the event, which featured local skippers and crews from the lower river and Lake Ontario marinas donating their time and boats to take participants on a cruise. All enjoyed food, drink, and music performed by The Junk Yard Dogs Band. The three-hour cruise was followed by a clambake cookout, a silent auction and basket raffle, and more live music by Soul Committee.

Event co-chairs Lori and Adam Burns, Melanie and Gary Tisdale, along with the Beatty family, all expressed gratitude for the outpouring of support from the community.

"The Youngstown Yacht Club, all of the skippers, crews, volunteers and many generous people, local businesses and organizations truly make this event possible," Burns said. "We are extremely thankful for their support year after year. This year, the cruise also set a record of 37 sailboats and powerboats that hosted over 228 participants floating down the Niagara River. This event is a great time as well as a great fundraiser for Niagara Hospice. We also had an additional 100 people for the clambake/cookout following the cruise."

Next year's cruise and clambake will be held Friday, July 15, at the Youngstown Yacht Club. For registration, information and updates, visit www.niagarahospiceregatta.com.