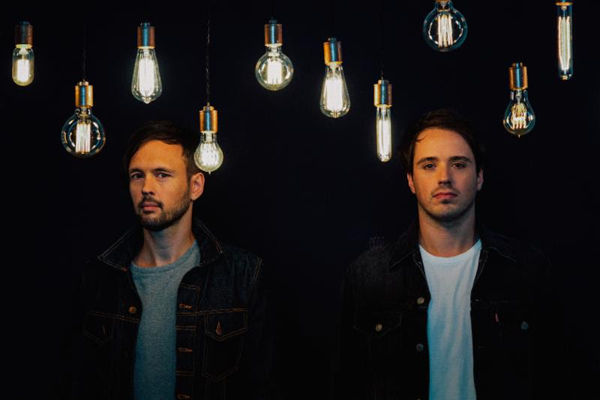 Atlas Genius new album, "Inanimate Objects" - the follow-up to the band's breakthrough debut, "When It Was Now" - is out now and available HERE. The band has unveiled the official video for the first single, "Molecules." Directed by longtime collaborator Claire Marie Vogel, it can be viewed HERE.

The Australian band performed "Molecules" last night during a return visit to "Jimmy Kimmel Live!" View their performance HERE. The track is a top 20 hit at alternative radio.

Atlas Genius is currently touring the U.S. in support of "Inanimate Objects." At 9:20 p.m. PT tonight, Yahoo! Live will stream their headline show at House of Blues in San Diego.

The band will join Passion Pit on tour, beginning with a show at House of Blues in Dallas on Sunday, and including a performance at The Wiltern in Los Angeles on Oct. 28. Atlas Genius performs at The Waiting Room in Buffalo Sunday, Sept. 20. Tickets are available HERE.

The band, which features brothers Keith and Michael Jeffery, produced "Inanimate Objects" with Frederik Thaae in Studio City. While in Southern California, the band was introduced to celebrity chef Jeff Mahin (Stella Barra, Summer House, M Kitchen) by Fitz and The Tantrums' Noelle Scaggs. He asked Atlas Genius to follow in Noelle's footsteps and participate in a DoRite Collab. Together with Mahin and chef Francis Brennan, the band concocted the "Friendly Ape" donut, which is available exclusively at DoRite Donuts in Chicago through Sept. 11. Named after a track on "Inanimate Objects," the vegan donut combines slow-roasted Michigan apples with a cardamom vanilla bean glaze, cinnamon granola and spices.

Atlas Genius' 2013 full-length debut, "When It Was Now," was hailed by Rolling Stone as a "spritely, melodic debut album" and featured the Gold-certified hit single "Trojans." After first being discovered by a slew of blogs, "Trojans" gained momentum online and on the radio. The band was signed to Warner Bros. Records and began 18 months of nonstop touring, including two national headline tours, opening for Imagine Dragons and Silversun Pickups, and playing festivals such as Lollapalooza, Outside Lands, Sasquatch and Firefly. Atlas Genius also performed on numerous television shows, including "The Tonight Show with Jay Leno," "The Late Show with David Letterman," "Late Night with Jimmy Fallon," "Conan" and "Jimmy Kimmel Live!"