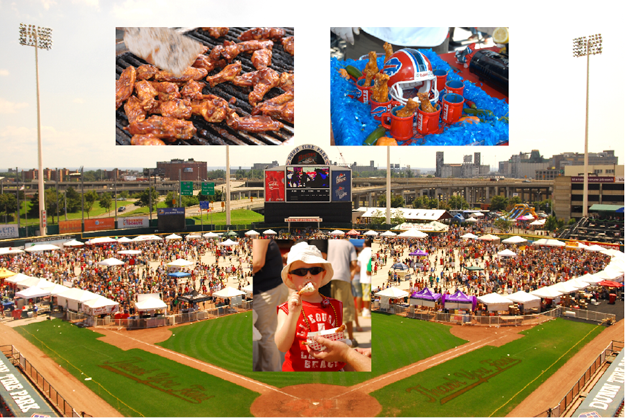 The National Buffalo Wing Festival, one of the country's most beloved food festivals, returns to Coca-Cola Field in Buffalo Sept. 5-6.

Now in its 14th year, the festival, which attracted 70,000-plus attendees from all 50 states and 34 different countries last year, will feature more than 30 local, regional, national and international eateries serving more than 120 styles of chicken wings.

In addition to the food frenzy, festivalgoers can enjoy a weekend packed with activities ranging from competitive wing eating contests, amateur cook-offs, pageants, music, children's entertainment and even the ever-popular "Bobbing for Wings" competition.

The 2015 National Buffalo Wing Festival is expected to be especially popular, as event organizers are weaving a "craft" concept throughout the weekend's activities. This means festivalgoers can enjoy everything from a cold craft beer and craft cocktail demonstrations, to several unique wing flavors and offerings.

"Everybody knows there are two traditional kinds of wings: buffalo and barbecue. But, we often forget that there's a whole other category of specialty wings that might include everything from those with a peanut butter and jelly sauce to 'Breakfast at Tiffany's' featuring maple syrup and bacon. We're coining this category 'craft' and pairing them up with craft beers created by local brewers," festival founder Drew Cerza said. 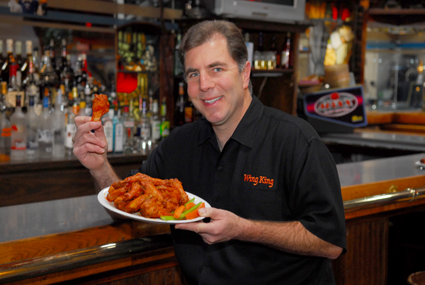 The centerpiece to this new craft-centric concept will be the first-ever "Craft Wing Showcase" in which guests can watch and learn as chefs demonstrate the creation of their unique craft wings, while local brewers pair each wing creation with a signature craft beer. The showcase happens from 1-8 p.m. Sept. 5 and from 1-6 p.m. Sept. 6.

In addition, local craft brewers including Resurgence Brewing Co., Big Ditch Brewing Co., Flying Bison Brewing Co. and Community Beer Works are teaming up for the Consumer's Beverages Craft Beer Corner where they'll be pouring more than 15 different styles of beer all weekend. Better yet, brewery representatives will be on hand to talk about craft beer and wing pairings.

Festivalgoers also can learn about the craft cocktail craze from local bartenders and mixologists who will be preparing, serving and sharing information on their favorite craft cocktails inside the Premier Gourmet Pavilion. Included will be local chefs preparing craft wings. Some of the participating restaurants, chefs and bars include Osteria 166, Ballyhoo, Vera Pizzeria, The Black Iron Bystro, chef Marco Scorintino from Marco's, Krista Van Wagner from Krista's Kitchen and chef William Cornelius from Chef William Creations.

"The lineup of restaurants this year is stronger than ever, including some new additions from the Northeast," Cerza said. "It always amazes me how many really good wing joints there are in the U.S. We're proud to bring them to Buffalo, so they can show their stuff."

For a full lineup of participating eateries, visit BuffaloWing.com/Restaurants.

One addition for this year is Buffalo's first and most popular food truck, Lloyd's Taco Truck. The mobile eatery will be on hand debuting its "Chicken Wing Taco."

Many restaurants will compete in the annual National Sauce-Off Competition for bragging rights to the best wing sauces in America. The competition includes eight different categories of wing styles. New this year, restaurants are challenged to come up with a unique, out-of-the-box creative "craft" wing, as well. 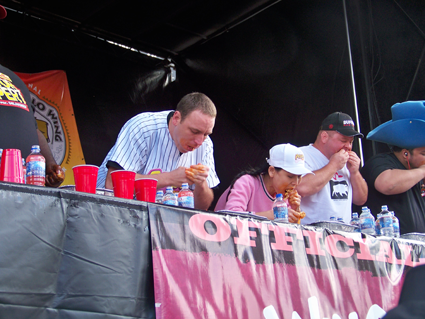 One of the annual highlights of the festival weekend is the United States Chicken Wing Eating Championship presented by the Seneca Buffalo Creek Casino. This wildly popular event, sanctioned by the International Federation of Competitive Eating, happens at 5 p.m. Sept. 6.

This year, the competition takes on epic proportions as top-ranked competitive eater Joey Chestnut returns to defend his title. Last year, Chestnut devoured 183 wings in 12 minutes to take the title. Relative newcomer Miki Sudo will attempt to reclaim her 2013 title, which was her first-ever wing-eating event. Crowd favorite and five-time Wingfest World Champion Sonya Thomas will be on hand to battle the field.

In addition to the U.S. Chicken Wing Eating Championship, the pros compete in the Buffalo Buffet Bowl competition at 6 p.m. Saturday, Sept. 5. The battle challenges eaters to consume five pounds of some of Buffalo's favorite foods, including pizza and roast beef on weck.

The competitions aren't just limited to the professionals at Wingfest, as the festival features several amateur cook-offs, including the Amateur Traditional Sauce Contest, Amateur Creative Sauce Contest and the BlueCross BlueShield Healthy Changes Every Wing contest.

In addition, the festival will present a collection of pageants, including the Miss Buffalo Wing Pageant (women 18 years and older), the Baby Wing Contest (children 0-4 years) and, new this year, the Little Miss Wing Pageant (girls 6-12 years).

Festivalgoers can compete in (or watch) the famous "Bobbing for Wings" competition in which participants dunk their heads into kiddie pools filled with blue cheese dressing to retrieve as many of the 100 chicken wings as possible within three minutes using only their mouths.

Ed Currie, founder of the Puckerbutt Pepper Co., will bring heat to the festival with his famous Carolina Reaper Peppers, which have been designated by the Guinness Book of World Records as the "Hottest Pepper in America."

This year's entertainment lineup includes master of ceremonies "Quiz Master" Dennis George, as well as one of Buffalo's favorite blues bands, The Heavenly Chillbillies, who'll liven up the festival with blues music throughout the weekend. For children, the always-popular Kid Zone will be running throughout the festival.