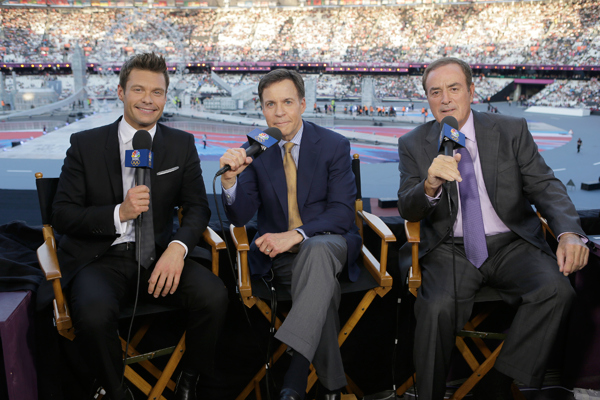 With just under a year to go until the opening ceremony, NBC Olympics announced today Ryan Seacrest will serve as host for NBC's late night coverage of the 2016 Rio Olympic Games.

Seacrest served as a correspondent for NBC's coverage of the 2012 London Games, which was the most-watched television event in U.S. history with more than 217 million viewers. In London, Seacrest interviewed U.S. swimmer Michael Phelps and was one of the hosts of the closing ceremony.

"The late night atmosphere will be electric," said Jim Bell, NBC Olympics executive producer. "And we're thrilled to have Ryan Seacrest in the middle of it all capturing Rio's unique flavor, talking to Olympic athletes and telling the stories of the day."

"Joining the NBC Olympics team at the 2012 London Games was an exhilarating experience," Seacrest said. "I appreciate Jim Bell's confidence, along with everyone at NBC Sports. I can't wait to reunite with the team of broadcasters and producers for the 2016 Rio Olympics, and I look forward to hosting the live late night show."

Seacrest is an internationally acclaimed host and producer for some of the most popular shows on broadcast and cable television, as well as on nationally syndicated radio and local radio.

He also is a successful entrepreneur with an Emmy-winning television production company, a men's tailored clothing and accessories collection (Ryan Seacrest Distinction), and is an investor in several media and technology companies. His philanthropic efforts are focused on youth-oriented initiatives, including serving as chairman of The Ryan Seacrest Foundation and honorary chair of the Grammy Foundation. The Ryan Seacrest Foundation will have 10 broadcast media centers - Seacrest Studios - in pediatric hospitals in cities across the country by the end of 2015. He is also on the board of the Los Angeles County Museum of Art (LACMA).

NBC Olympics is responsible for producing, programming and promoting NBCUniversal's Olympic coverage. It has produced every Summer Olympics since Seoul in 1988 and every Winter Olympics since Salt Lake City in 2002. NBCUniversal has the U.S. media rights on all platforms to all Olympic Games through 2032. At the conclusion of the 2032 Games, NBCUniversal will have presented 23 total Olympic Games and 17 consecutive, the most for a U.S. media company in both categories.

NBC has won an unprecedented 95 Emmy Awards for its Olympics coverage, as well as a prestigious Peabody Award for its presentation of the Beijing opening ceremony in 2008.