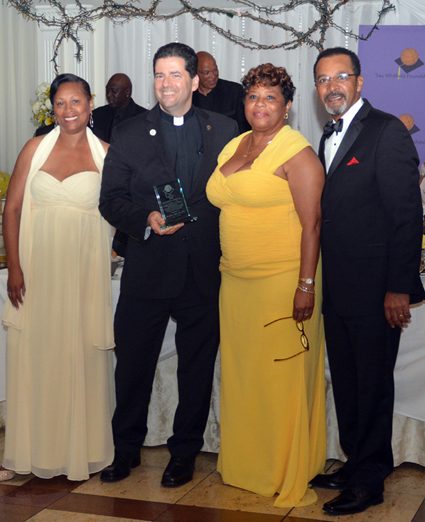 The Rev. James J. Maher, C.M., Niagara University president, is presented with the Trey Whitfield Foundation's 2015 Adult Honoree Award by event emcee Clifton Davis and members of the organization's board of trustees.

The Rev. James J. Maher, C.M., president of Niagara University, was named a 2015 Adult Honoree by the Trey Whitfield Foundation during the organization's 23rd annual awards dinner, which was held July 17 in Brooklyn.

The Trey Whitfield Foundation Inc. was founded in 1989 to commemorate the life and spirit of Trey Whitfield, a young student-athlete from Brooklyn who died tragically just prior to his high school graduation. In his memory, the foundation pursues "his dream that everyone, regardless of ethnic background, has equal access to the educational opportunities that they need to reach their potential in life."

Maher, in his acceptance remarks, reaffirmed his commitment to ensuring higher education, specifically at Niagara University, will be accessible and affordable to young people as they pursue their dreams and live the mission exemplified through the foundation and its honorees.

"From Clifton Davis and Pam Oliver to the foundation's board of trustees and tonight's honorees, it's humbling to be in the presence of so many people who have shown so much dedication to serving gifted young people in need," Maher said. "At Niagara University, we strive to fulfill the mission of St. Vincent de Paul by providing access to education. We maintain that all young people can attain their God-given potential if they find someone who helps them and cares for them - regardless of their racial, cultural or socioeconomic background."

Indeed, Maher has made access and affordability to excellent education hallmarks of his Niagara University presidency. During the 2013-14 academic year, 98 percent of undergraduate students at NU received scholarship assistance from the university totaling nearly $40 million.

Niagara also continues to institute new scholarships, including one established in January by the Vincentian community that is intended for students who demonstrated outstanding participation in service activities in high school.

Niagara's efforts to deliver the greatest value for a student's educational dollar were recently praised by Money magazine when the university was Buffalo-Niagara's highest-ranked private institution in the publication's "2015 Best Colleges" rankings.

Additional information on the Trey Whitfield Foundation Inc. is available at www.treywhitfieldfoundation.org.