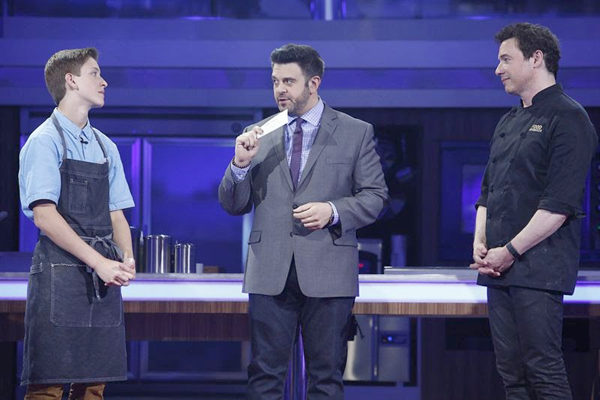 Previously a semifinalist on "Master Chef Junior," Glass is an accomplished home chef from Thousand Oaks, California. He hopes to attend New York's famed Culinary Institute of America after high school so he can pursue a career as a professional chef. In the July 16 episode, he shows off his culinary skills while racing against the clock to try and beat some of the top chefs in the country, including Rocco DiSpirito, a James Beard award-winning chef, health advocate, author of New York Times bestseller "Cook Your Butt Off!" - and the creator of "The Pound A Day Diet" meal delivery service.

Glass also will square off against four other pro chefs who will be familiar to viewers from their appearances in shows ranging from "Top Chef" and "Chopped" to "Hell's Kitchen" and "Next Food Network Star." The featured chefs are food stall and food truck chef and owner Hop Phan (Santa Ana, California), whose culinary specialty is Latin/Asian fusion; Chef Lovely (Los Angeles), a celebrity private chef and culinary specialist for Bloomingdale's known for glamming up the kitchen; chef and culinary consultant Chris Nirschel (New York), whose in-demand cuisine is inspired by Argentinean, Italian and French flavors; and chef/catering company owner Keriann Von Raesfeld (San Jose, California), who has won cooking competitions all over the world as a representative of the U.S.

With each round, Glass will climb a money ladder with increasing cash prizes for every professional chef he knocks out, with the chance to win as much as $100,000. The episode is also full of surprises, as DiSpirito brings a special gift for the teen chef, who later gets the surprise of his life in an emotional, must-see ending that viewers won't want to miss.

Fans can visit the official "Food Fighters" website at http://www.nbc.com/food-fighters.