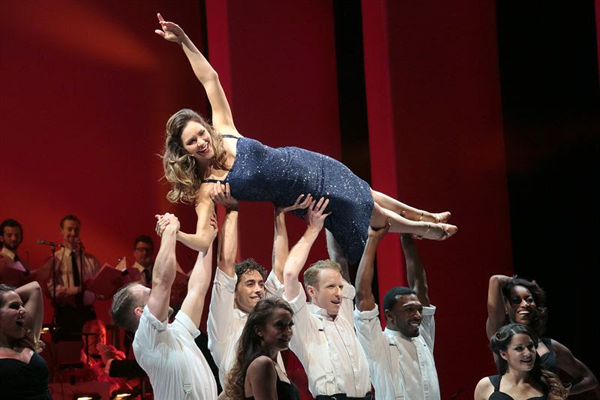 Katharine McPhee as Marilyn Monroe on ""Smash." No casting has been announced and no one from the cast of "Smash" is involved in the stage musical at this point.

'Bombshell' shifts from screen to stage

Following the explosive and well-received Actors Fund benefit that featured the music of "Bombshell" from the NBC television series "Smash," Universal Stage Productions has begun development on "Bombshell" as a musical for the stage.

The announcement was made Monday by Robert Greenblatt, chairman of NBC Entertainment, and Jimmy Horowitz, president of Universal Pictures, who run Universal Stage Productions together.

In the wake of the June 8 benefit concert, the New Yorker proclaimed "Bombshell" "the best Broadway musical that doesn't exist," and the New York Post said, "Technically there was never a Marilyn Monroe musical, but after a production like this, maybe there should be."

"There is a still a lot of love for 'Smash,' and a rabid fan base out there, and we're thrilled to be able to keep the dream alive as we work towards bringing 'Bombshell' to theatre audiences," Greenblatt said. "'Smash' was ambitious because every episode was a complicated musical for television, and we also built the foundation of the musical-within-the-musical about Marilyn's endlessly fascinating and tumultuous life. Over the course of two seasons, an entire 'Bombshell' score was written to service 'Smash' storylines, and now that show will have a chance to stand on its own."

"We are so thrilled that 'Smash' isn't over and that 'Bombshell' gets to live on," said Craig Zadan, who, along with partner Neil Meron, will serve as the lead producers of "Bombshell." "The Emmy-nominated songs by Marc Shaiman and Scott Wittman, including the iconic 'Let Me Be Your Star,' are every bit the caliber of their Tony- and Grammy-winning Broadway work. The Actors Fund benefit reinforced how alive this material is on stage and how much the audience wants to see the Marilyn Monroe musical in its entirety."

Added Meron: "As life imitates art, Joshua Bergasse, our brilliant Emmy-winning choreographer from 'Smash,' actually made his Broadway debut this season as a choreographer and was nominated for a Tony Award. Now he will get the chance to reimagine his exhilarating 'Bombshell' dances for the theater."

Steven Spielberg had long wanted to develop a series about the making of a Broadway musical and "Smash" was that idea come to life. He was the executive producer of the series and will be involved in the new stage production of "Bombshell." A book writer will be announced shortly.

Shaiman and Wittman, also executive producers of the series, will continue on "Bombshell" with Shaiman serving as composer and co-lyricist, and Wittman as co-lyricist. Their Broadway successes include "Hairspray," "Catch Me If You Can" (based on the film directed by Spielberg) and "Charlie and the Chocolate Factory," which is currently running in London's West End and will arrive on Broadway in the future.

"Whether watching the 'Smash' cast at the benefit at the Minskoff Theatre or hearing teenagers across the world on YouTube, it's been thrilling for us to hear our songs so embraced and performed so phenomenally," Shaiman and Wittman said. "We can't wait to see what happens next."

Meron and Zadan, who functioned as executive producers of the series and also produced the Actors Fund "Bombshell" concert, have been involved in a string of hit film and television musicals, including movie adaptations of "Hairspray" and the Oscar-winning "Chicago," as well as NBC's live events "The Sound of Music," "Peter Pan" and the upcoming production of "The Wiz." They have also produced successful Broadway revivals of "Promises, Promises" and "How to Succeed In Business Without Really Trying."

Justin Falvey and Darryl Frank, executive producers of "Smash" and co-presidents of Amblin Television, also will be involved as producers of "Bombshell."

No casting has been announced and no one from the cast of "Smash" is involved in the stage musical at this point.

"Bombshell" is based on the television series "Smash," which was created by Theresa Rebeck. "Smash" is a production of Universal Television.