The North Tonawanda History Museum has learned that it will be receiving a Wurlitzer grand piano, circa 1930s, in coming weeks. The instrument and its relationship to the now 11-year old History Museum are interesting.

In the summer of 2008, while the museum still occupied 314 Oliver St. as temporary rented facilities and stored most of its collection in the former Lowry School Building, museum Executive Director Donna Zellner Neal received a phone call from Glenda Goodwin Cova from Wilmington, Delaware. Cova informed Neal that her mother, Nancy Goodwin, was relocating to Connecticut to be near family members and didn't think she could take her beloved Wurlitzer grand piano with her.

Cova arranged for a quote to move the piano to North Tonawanda from Wilmington, Delaware, and Goodwin had the piano appraised. The appraisal, moving cost estimate and a photo of the piano were provided to Neal. The History Museum has never had funding for purchasing items for the collection nor for shipping or moving charges. A news announcement about the piano, however, brought in a donation from a local manufacturing firm to cover the moving cost to bring the piano to North Tonawanda.

But by the time the donation check was deposited and a check from the museum was sent to the moving company, Goodwin had changed her mind. She could not part with her beloved piano. Instead, she and her family had it moved with her other possessions to Connecticut.

On March 1, 2015, nearly seven years later, Neal received an email from Goodwin's family, informing her that Goodwin had passed away and had always wanted the History Museum to have the piano for its collection. After two days of communications, it was determined that the family could cover the cost of shipping their mother's beloved piano to the History Museum. 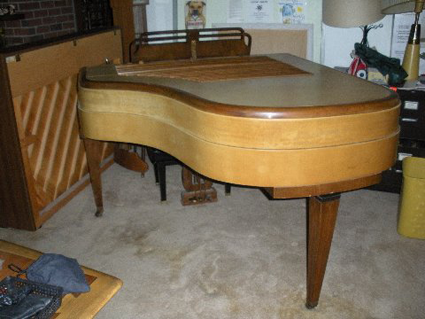 Shown is Nancy Goodwin's Wurlitzer grand piano in 2008 while still in Wilmington, Delaware.