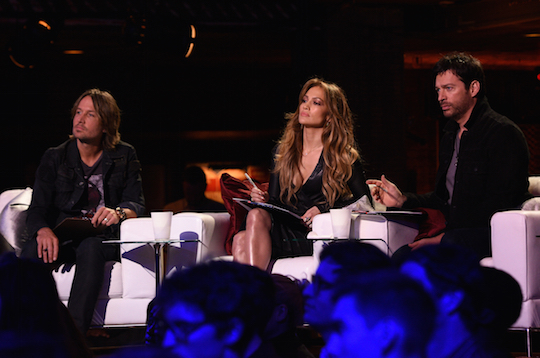 "American Idol XIV": Pictured, from left, are Judges, Keith Urban, Jennifer Lopez and Harry Connick Jr. at the "Idol Showcase" inside the House of Blues. (FOX photo by Michael Becker).

"American Idol" auditions came to a dramatic end Thursday, as judges Jennifer Lopez, Keith Urban and Harry Connick Jr. revealed their remaining picks for the top 24 semifinalists. It will now be up to America to vote for their favorites as the semifinalists head to Detroit for the first voting shows of the season.

Starting next week, viewers at home will have five ways to vote for their favorite singer, including voting online at AmericanIdol.com; via the FOX NOW App; via Google Search; via text messaging; and via toll-free calling when the "American Idol" vote window opens at the top of the show. All voting rules and frequently asked questions will be available beginning Wednesday on americanidol.com.

All episodes of the current season of "American Idol XIV" are available on FOX NOW and Fox on Demand to subscribers of participating pay-TV services. To learn more about FOX NOW, visit www.foxnow.com.