Youngstown resident Scott Heidt is set to release his first independent film, "C.O.D.E," with writer and director Amire K. Reed of AKREED Films. The film will be shown Friday at 7:30 p.m. inside the Riviera Theatre and Performing Arts Center, 67 Webster St., North Tonawanda. Doors open at 6:30 p.m. Tickets are $15.

Heidt and Reed co-wrote, directed, edited, produced and star in the film, which was shot on location throughout Niagara Falls, Lewiston and the Buffalo/Niagara region (including the Niagara Arts and Cultural Center, which is heavily featured in the film).

"C.O.D.E" is a suspense thriller about three co-workers who mistakenly receive a classified government file and soon learn their lives are in jeopardy. Filming began in January 2013.

Heidt and Reed collaborated on the project after Reed filmed two music videos for Heidt's band of the same name. The band HEIDT released its third record in 2013 and recently opened for the '80s band Winger at Braun's Concert Cove in Akron. Music from HEIDT will be featured on the "C.O.D.E" soundtrack.

This is Reed's second independent film. His first film, "Bartenders," was released in 2012.

For more information about "C.O.D.E" and to view the trailer, visit: 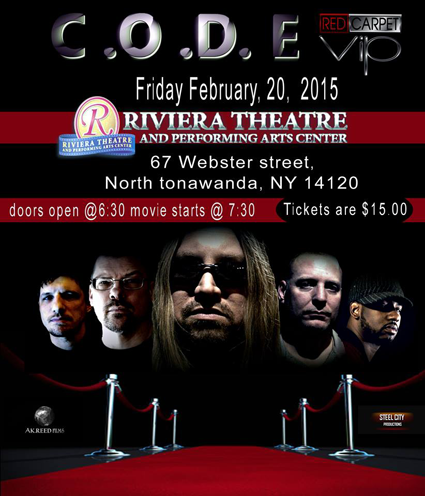