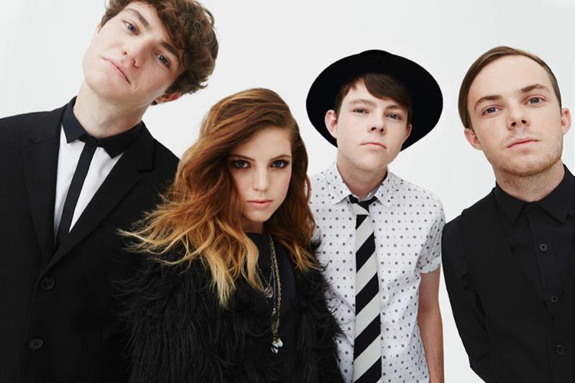 "Bright," the new single from alt-pop breakout band Echosmith, is already making waves at radio, and now MTV.com and VH1.com have premiered the accompanying music video. MTV describes the video as "just as beautiful as the song" and "completely light-hearted" in the masterful way that it "compares the complicated feeling of love into something that's simply romantic: star-gazing."

Directed by Declan Whitebloom (Taylor Swift, One Direction), the video follows the band as they prepare to head out on a camping adventure with a group of friends. As lead singer Sydney Sierota exclusively told ETonline behind the scenes at the shoot, "The song is very simple, but at the same time it has a lot of meaning behind it, just about love."

She elaborated, "It's about your friends and your significant other and all those that you interact with daily. That's why this song, I think deserves, such a simple and beautiful video."

"Bright" is the follow-up to last year's certified platinum hit "Cool Kids," which first launched the L.A.-based siblings into the spotlight. The new single just officially impacted at radio last week, and immediately was the No. 1 most added at both Top 40 and Hot AC.

The band just launched its first full-scale headline tour across the country, with multiple dates already sold out, and upcoming stops including Atlanta, New York and Philadelphia. A full list of confirmed dates are available now at Echosmith.com.

Echosmith and "Cool Kids" dominated the charts in 2014, everywhere from Hot AC and Top 40 radio to the Top 10 of the iTunes singles chart. Both MTV and VH1 took notice and named the band an MTV "Artist to Watch" and VH1 "You Oughta Know" Artist for the year, and, in turn the band earned rave reviews from the likes of ELLE, Rolling Stone, Teen Vogue and Grantland for its distinctive melody-minded, new wave-influenced sound.

Echosmith is the Sierota siblings, led by 17-year-old Sydney on vocals, with brothers Jamie (vocals/guitar), Noah (vocals/bass) and Graham (drums).