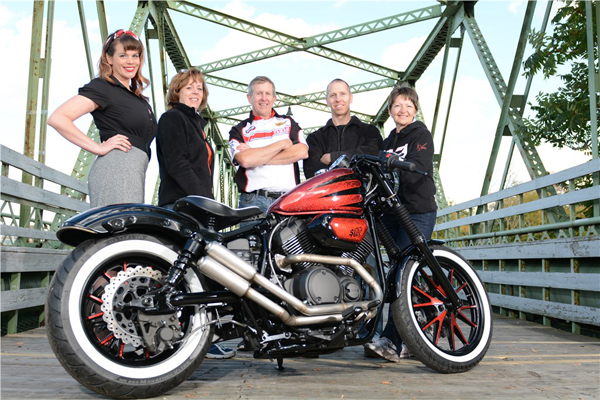 •Taken from the Jan. 23 Island Dispatch

Bob Weaver Motorsports of Niagara Falls Boulevard in Wheatfield has won the 2014 "Battle of the Bolts" contest, winning out over 39 entries entered in this year's contest.

The "Battle of the Bolts" was held between Star Motorcycle dealerships across the country, with the objective to rebuild a Yamaha Bolt with a custom look. Each dealership started with a stock Bolt and an open book to Star custom accessories.

The competition began with regional contests before being narrowed down to six winners who vied for top honors in a national competition, which was decided by public votes.

"Thanks STAR Motorcycles for giving us the opportunity to do this and thanks to all of my employees who worked on this fun project," wrote Bob Weaver Motorsports on the "Battle of the Bolts" webpage.

The idea to enter the Battle of the Bolts contest started at a monthly employee meeting, Weaver wrote at starmotorcycle.com. "I got a few responses but as the project got underway, more people got involved," he said. "We all agreed to build a bobber style bike. I know I wanted a red metal flake bike (living and riding in the '60s and '70s, that is what many of us did - we painted the tank and side covers in metal flake). We started by asking our title clerk's husband, Larry Hall, who is also a customer and painter, to paint the tank in red metal flake, any design he wanted. When we got the tank back, I knew exactly what I wanted to do. The points in the tank matched the points on the Bolt's wheels, so we decided to paint the wheels and the air cleaner cover (side cover on '60s and '70s bikes)."

Scott Jahren painstakingly taped off the two wheels and the rear pulley, and they were outfitted with white wall tires from Metzeler's. They removed the turn signals and replaced them with a Low and Mean kit and removed the rear taillight and relocated it on the left side with a Low and Mean relocating kit. They ordered the lower Bolt shocks and braided cables from STAR.

Dave Klock fabricated the complete exhaust system, including flanges, mounts and tips and he welded the holes in the rear fender to smooth it out for Jahren to paint.

They borrowed a page from the old school and turned the stock handlebars upside down, at no cost.

"To pick up the colors of the wheels with the red, white and black, we had another customer, Rocky Casullo, reupholster it. We decided on 1-inch pleats with white piping and black sides," Weaver said. "We wanted it to remind you of your Schwinn or Huffy bicycle. I think it does just that!"

"A passer-by commented, 'Hey that looks like the seat off my first Huffy bicycle,' " Weaver said. "I guess we accomplished our goal. We then did all the detail work of removing all the visible bolts, nuts, washers and screws as well as the engine side cover and painted them black, for the 'blacked out' look. We were now done and everyone thought our Bolt came out great!"

"Everywhere we took the bike, people asked what is that? Can I buy it? How much is it? So, being the sales people we are, we collected names and told them we would call them when we were done with it, or better yet, they could build one themselves," Weaver wrote.