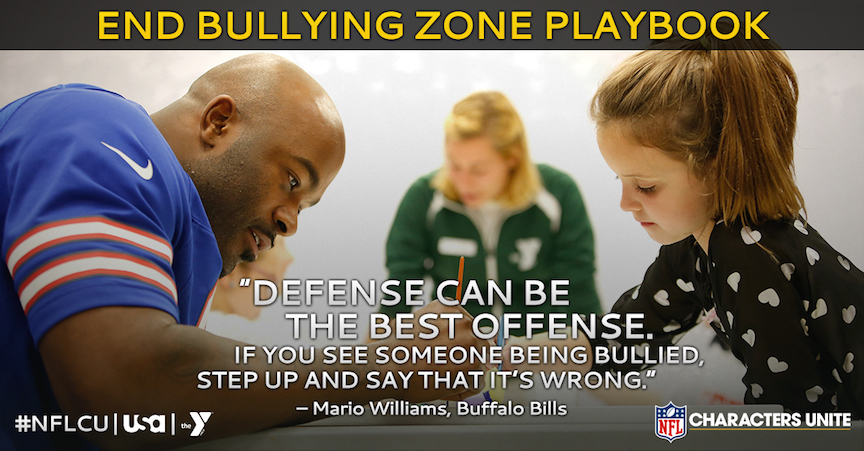 YMCA Buffalo Niagara is pleased to be a part of USA Network's fourth annual "Characters Unite" documentary. This program, in partnership with the National Football League, is part of USA's award-winning "Characters Unite" public service campaign to combat bullying, prejudice and discrimination.

The annual television special profiles NFL stars who have faced difficult life challenges, including Williams, who nearly sidelined his football career after losing a loved one in the war in Iraq. This life event played a key role in connecting Williams with 8-year-old Sophia, who lost her father, also due to the war, and was being bullied as a result.

Williams mentored Sophia and, by sharing his own story and engaging in a confidence-building activity, he was able to encourage Sophia to find the character, strength and courage to persevere.

Additionally, the YMCA has provided Sophia with a YMCA summer camp experience until she ages out of the program so that she continues to be surrounded by caring, positive and supportive role models and children who will fill her life with laughter.

"It's a privilege to share the courageous and inspiring stories of young people and NFL stars," said Toby Graff, USA's senior vice president, public affairs. "We are proud to work with the Y and the NFL to create this film that serves as the centerpiece of our 2014 'Characters Unite Month,' and can help raise awareness of bullying and change lives."

"We are pleased to join with the USA Network again on this documentary, which is a powerful vehicle for spreading a message of tolerance and emphasizing the importance of integrity, on or off the field," said Tracy Perlman, NFL vice president of entertainment marketing and promotions.