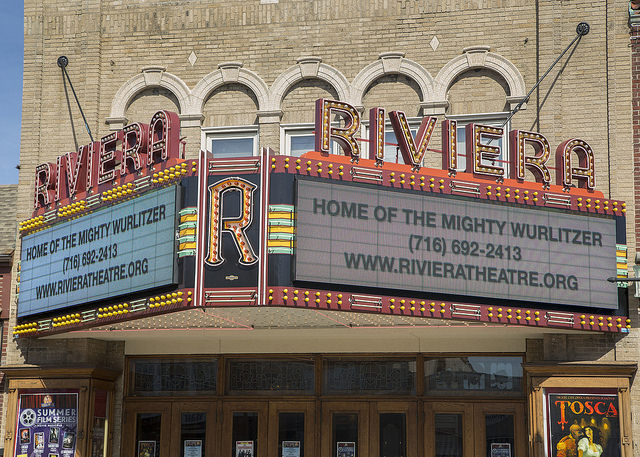 Opening night of the new "Twin Cities Rivera" (as it was spelled then) was a gala event in the Tonawandas. Advance reservations for opening night cost $1. Present on this special evening were the mayors of both Tonawandas. From the stage, Mayor James P. Mackenzie of North Tonawanda praised the president of the ownership corporation of the theatre, Henry Henshel, and the theatre's manager, James J. Kelly. Messages of congratulation of the grand opening were received from Gov. Alfred E. Smith and famous movie producer Cecil B. Demille.

Featured on the screen, were the movies "Upstage" starring Norma Shearer, "The Mona Lisa" in Technicolor, a short comedy and the newsreel. Organist Fred Meyer accompanied the films and soloed at the "Mighty Wurlitzer." The stage featured vaudeville and musical events, as well.

Billed as the "Showplace of the Tonawandas," the Riviera Theatre was built in 1926 by the Yellen Family. Architects Leon H. Lempart and Son drew the plans, which were patterned after the Italian Renaissance. Ferdinand Kebely painted the interior artwork at the Rochester Studio of Willard M. Lusk.

Today, the Historic Riviera Theatre is owned and operated by the Riviera Theatre and Organ Preservation Society, a registered 501 (c)(3) not-for-profit organization. The mission is to preserve and maintain the theater and the "Mighty WurliTzer" organ and to promote the performing arts.

The Riviera Theatre has come a long way over the past 88 years, as many historic theaters throughout North America have closed and/or were demolished for parking lots and new development. The Riviera Theatre continues to thrive, make progress and entertain guests with quality programming while preserving the historic character of the venue.

Many areas of the historic theater have been improved to allow the venue to add more events (more than 175 annually), increase visitors (100,000 annually) and continue to entertain patrons and supporters for many years to come.

As a direct result of the progress, areas around the theater have flourished, with new restaurants, bars, shops and a renewed sense of pride. The Riviera Theatre has become a regional destination attracting visitors form across New York, Southern Ontario, Ohio, Pennsylvania and around the world.

As The Riv looks toward the future, progress is being made to move forward with more improvements, including digital projection conversion so the theater can play more movies more often; a 23,000-square-foot addition that will include new event space; and new restrooms to help preserve the historic theater for the community to enjoy for generations to come.

The Riviera Theatre could not do any of this without the support of patrons and supporters in the community. Organizers continue to seek support and donations to continue their mission.