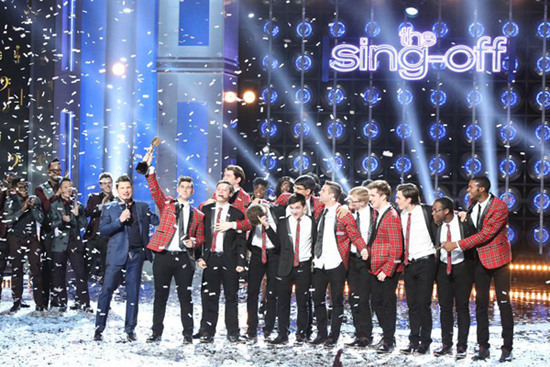 Melodores took the first-place prize of $50,000 on NBC's two-hour special holiday edition of "The Sing-Off" that aired Wednesday night.

Melodores consists of 12 male students who attend Vanderbilt University in Tennessee. Founded in 2009, Melodores strives to be the best all-male collegiate group in the world. Lead singer Ted Moock is featured in the upcoming film "Pitch Perfect 2."

While collegiate groups have competed in each season of the a-cappella series over its five installments, this is the first time one took home the ultimate prize, creating a pitch perfect ending to this year's special.

On its way to "The Sing-Off" title, Melodores sang "Trumpets" by Jason Derulo, and "Take Me to Church" by Hozier. Among the final three groups competing, Melodores outscored Traces and The Exchange.

Melodores will join "The Sing-Off Live! Tour" on select concert dates. The 55-city national tour kicks off Feb. 17 in Verona, and features fan favorites VoicePlay (season 4), Street Corner Symphony (season 2) and The Exchange (holiday special). On tour, the groups will perform a-cappella versions of this year's chart-topping hits as well as favorite arrangements from the TV show. Visit www.singofftour.com for complete ticketing information and tour updates.

The televised competition was judged by Jewel, Shawn Stockman and Fall Out Boy frontman Patrick Stump. Nick Lachey served as host for his fifth year.

Fans can visit the official show site at http://www.nbc.com/sing-off/ for the latest "The Sing-Off" news, videos, and photos.