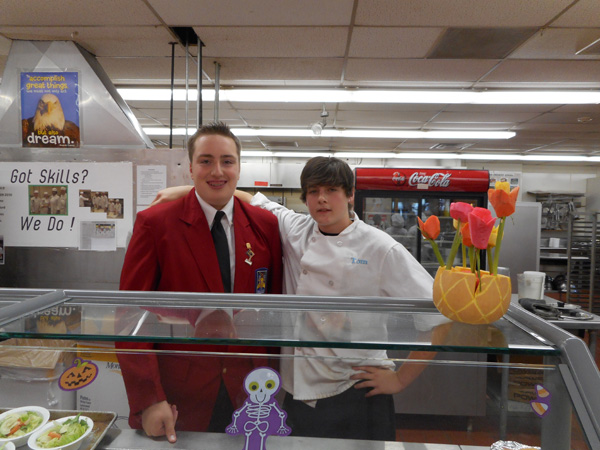 Thanks to the cooking skills of Bob Ihle's Culinary Arts students at the Niagara Career and Technical Education Center, Niagara Hospice will be receiving a generous donation. The students prepared a pasta dinner, which they sold at the school's recent open house. All 384 dinners sold out, and a portion of the proceeds will be going to Niagara Hospice, a charity that was chosen by the class.

"That open house was one of the busiest we have ever had," Ihle said. "The students in my class and SkillsUSA did an outstanding job and we were so pleased at the turnout. Altogether we raised about $2,300, which will be used for supplies for the students and to benefit Niagara Hospice."

Pictured, SkillsUSA New York State Secretary Ray Delucci of Niagara-Wheatfield (left), who is also in the culinary program, helped with the door prizes and then joined classmate Tom Bajorek of North Tonawanda for the pasta dinner.