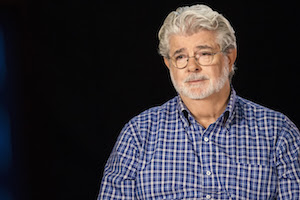 As excitement continues to build over the new trilogy in the "Star Wars" franchise, the man who created it - George Lucas - is going to take Turner Classic Movies viewers on a ride through some of the movies that have sparked his imagination and inspired his career. This November, Lucas will talk extensively about his fantasy favorites in the one-hour special "TCM Presents A Night at the Movies: George Lucas & The World of Fantasy Cinema," the latest in the network's ongoing series of genre documentaries. Produced by Amblin Television and award-winning filmmaker and author Laurent Bouzereau, the one-hour special will premiere at 8 p.m. Tuesday, Nov. 25.

"George Lucas & The World of Fantasy Cinema" will kick off a 24-hour salute to fantasy movies, with such memorable films as "The Secret Life of Walter Mitty" (1947), "The Thief of Bagdad" (1940), "The Seven Faces of Dr. Lao" (1964) and "The 7th Voyage of Sinbad" (1958). A complete schedule is included below. Each of these films represents the power of cinema to transport one into a world of dreams.

TCM recently released its first volume of original specials from "A Night at the Movies" on home video. Sold exclusively through TCM's online store - shop.tcm.com - "TCM Originals: A Night at the Movies, Vol. 1" includes four memorable specials: "The Suspenseful World of Thrillers" (2009), "The Gigantic World of Epics" (2009), "Merry Christmas!" (2011) and "The Horrors of Steven King" (2011).

Bouzereau, who writes, produces and directs TCM's "A Night at the Movies" specials, is an award-winning filmmaker and author. He has created many documentaries on the making of films and on some of the world's most acclaimed filmmakers, including Steven Spielberg, Lucas, Peter Bogdanovich, Brian De Palma, William Friedkin, Alfred Hitchcock, David Lean and many others. Bouzereau directed "Roman Polanski: A Film Memoir," and the TCM original documentary "Don't Say No Until I Finish Talking: The Story of Richard D. Zanuck." He also has written or co-written 11 books on cinema, including "The Art of Bond" and, most recently, "Alfred Hitchcock: Piece by Piece."

Lucas' devotion to timeless storytelling and cutting-edge innovation has resulted in some of the most successful and beloved films of all time. In 1971, Lucas transformed an award-winning student film into his first feature, "THX-1138." Lucas' second feature film, the low-budget "American Graffiti" (1973), became the most successful film of its time. Pushing the boundaries of storytelling, "American Graffiti" was the first film of its kind to tell multiple stories through interweaving narratives backed by a soundtrack of contemporary music.

But it was Lucas' third film, 1977's "Star Wars," that changed everything, breaking all box-office records and setting new standards for sophistication in film visuals and sound. The film garnered eight Academy Awards, and inspired a generation of young people to follow their imagination and dreams. The success of "Star Wars" allowed Lucas to remain independent and continue operating in Marin County, California.

As Lucas continued making movies, he also furthered the development of Lucasfilm Ltd. into one of the world's leading entertainment companies for motion picture and television production, which included Industrial Light & Magic and Skywalker Sound, LucasArts, Lucas Licensing, Lucas Online and Lucasfilm Animation. In 2012, Lucas retired from corporate life. Lucasfilm Ltd. was acquired by the Walt Disney Co., with longtime-Lucas collaborator Kathleen Kennedy named as his successor.

Over the years, Lucas has received some of the entertainment industry's highest honors, including the Irving G. Thalberg Memorial Award from the Academy of Motion Picture Arts and Sciences, the American Film Institute's Lifetime Achievement Award and the Lifetime Achievement Award from the Visual Effects Society. He also received an honorary doctorate in fine arts from the USC School of Cinematic Arts and the prestigious NAACP Vanguard Award, given to the person whose groundbreaking work increases understanding and awareness of racial and social issues.

Lucas was honored in 2004 with the nation's highest award for technological achievement, the National Medal of Technology, presented by the president of the United States, for 30 years of innovation at Industrial Light & Magic. In 2013, he was awarded the National Medal of Arts, the highest award presented to artists and patrons of the arts by the U.S. government, bestowed upon him by President Obama in recognition of lifetime achievement in the creation and production of the arts in the U.S.

Lucas has also taken a philanthropic leadership role in applying his technical and storytelling expertise to the classroom, engaging students through interactive multimedia environments. In 1991, he founded the George Lucas Educational Foundation (www.Edutopia.org) to pursue and promote best practices in education - highlighting proven strategies, tools and resources for creating lifelong learners. He also serves on the board of the Film Foundation and is a member of the USC School of Cinematic Arts advisory board.

Most recently, Lucas announced plans to build the Lucas Museum of Narrative Art (www.LucasMuseum.org), which will emphasize illustrative, digital, cinematic and animation art as an avenue for the exploration of the great storytelling history, populist works and artistic innovation of the past 150 years.