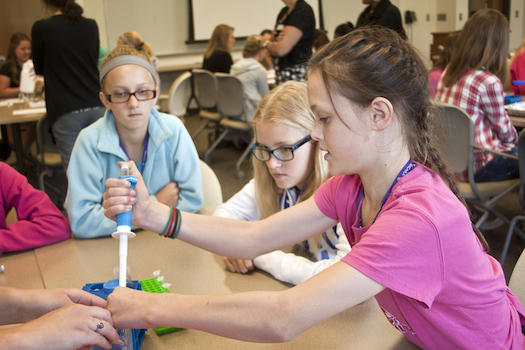 Student Molly Dineen takes a turn utilizing a vortexing apparatus during a Niagara University camp intended to introduce girls to the fields of science, technology, engineering and math.

According to US2020, there will be 1.2 million job openings in the U.S. in the science, technology, engineering, and math fields by 2018, with a significant shortage of qualified applicants to fill them.

Right around that same time, the students currently participating in a STEM camp offered through Niagara University's College of Education will be choosing a college major.

"As educators, it has become increasingly important for us to enlighten young people on the opportunities that exist in today's workforce in science, technology, engineering and mathematics," noted Dr. Debra Colley, dean of the college. "The shift toward globalization and a knowledge-based economy makes these skills, especially technology, pervasive in virtually every aspect of daily life."

Niagara's College of Education, for several years, has sought to provide access to quality STEM education for children - especially girls and low-income youths, who studies show enter the STEM fields at the lowest rates.

Last July, National Grid, in partnership with NU and the Niagara Falls City School District, began providing funding for a graduate-level STEM and advance manufacturing professional development courses for 45 teachers from the Niagara Falls City School District. With that training now completed, NU is hosting complementary summer camps; the goal of the three-year program to enhance STEM and AM education in order to provide students with the tools and resources to be prepared for the future job market.

As part of this year's camp, several successful women who are engaged in STEM-related careers spoke with campers - all girls in grades 7-9 - to encourage them to consider occupations in the fields that President Barack Obama has repeatedly stressed the importance of, saying, "Leadership tomorrow depends on how we educate our students today - especially in science, technology, engineering and math."

The women explained the winding roads they took to break into careers that had been traditionally dominated by men.

Slichta, for example, started out as an accountant and then became a nurse before landing a position with the Health Foundation for Western & Central New York.

Small, meanwhile, offered some tongue-in-cheek advice. "If you end up becoming scientists, please don't write your lab reports like your text messages," she said.

Finally, despite being held up in an out-of-town airport, Lisa Montesano, lead environmental engineer at National Grid, took the time to relay an inspirational message to campers through Patti Wrobel, assistant dean of NU's College of Education.

"Always be the driver, never the passenger," Montesano encouraged the 30 girls.

For more information on NU's College of Education, visit www.niagara.edu/education.