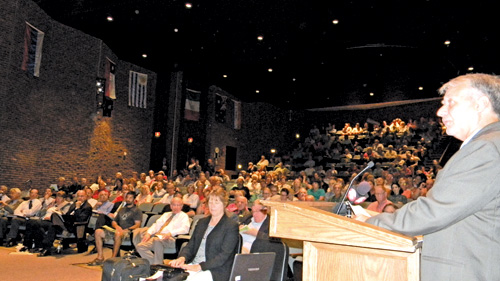 Siting board members, charged with determining the future of CWM Chemical Services in Porter, heard an earful from the public Wednesday at Lewiston-Porter High School.

Over the course of two public hearing sessions that, combined, went on for more than seven hours, the eight members appointed by Gov. Andrew Cuomo, including three local ad hoc representatives, heard it and heard it again - a resounding "no" to expansion. They heard it from residents, from local officials, from the Niagara County Health Department, from the Niagara County Legislature, from the Lewiston-Porter School District, from area religious groups, from Niagara County farming interests, from scores of environmental interests and from the residents, young and old. Their plea was common and it was firm: No more hazardous waste landfilling at CWM.

CWM is in the final stages of pursuing a $55 million expansion/operating permit with the state Department of Environmental Conservation that, if approved, would allow it to build a new Residuals Management Unit-2 landfill, roughly 44 acres in size, at its Balmer Road facility. Wednesday's siting board session, the final chapter of what's become a decades-long process, was intended to gauge the views of area residents.

And comment, they did. Throughout the session siting board members heard scores of arguments against approving the application. Included were:

•Concerns of radiological contamination, said to still exist on CWM's property from prior World War II-era LOOW site activities, that over the years have been aggravated and continue to be disturbed by ongoing CWM landfilling activities;

•The accompanying disruptions to the area's groundwater and negative impacts on water quality in the Niagara River and Lake Ontario from CWM landfilling and residual operations;

•The negative impacts to the area's $122 million agricultural industry from CWM operations;

•The negative impacts on a thriving tourism industry, including sport fishing, from CWM operations;

•How DEC has not acted in the area's interests for close to 30 years, dating from an '80s-era court decision that was never followed, and how DEC, to this day, continues to sidestep its own laws and work in favor of CWM;

•How the area has not been adequately served by the state and DEC in terms of the equitable and geographic placement from an overabundance of waste site operations, hazardous and otherwise, that exist in Niagara County, in addition to CWM;

•How the DEC has already determined that adequate landfilling capacity exists nationally due to advanced technologies, and there is no definitive need for additional landfilling to handle hazardous waste;

•That CWM already has more than 8 million tons of hazardous waste stored at its Balmer Road facility and that approving expansion would add 20 years of more landfilling activity to an already burdened local environment;

•The negative impacts on the area's quality of life; the concerns for the safety of children attending Lewiston-Porter; the concerns over truck traffic and impact of spills;

•That local governmental entities, including the Town and Village of Lewiston, the Village of Youngstown, the Lewiston-Porter School District, and the Niagara County Legislature who have all come out against expansion.

•Sharie Rhue of Youngstown pleaded with siting board members, telling them, "We have children, families, names; we live here." The woman told siting board members of disruptions to her own neighborhood, of seeing fire companies answering calls at CWM. "Who really benefits from CWM?" the resident asked.

•Joyce Casper of Ransomville, an employee at an unnamed local chemical company, who raised allegations to the siting board of CWM falsifying its own records and documentation of waste materials in its trucks. "CWM is managing lives, not chemical waste here," the woman said.

•Youngstown resident Sandra Olsen, who questioned the purpose of having CWM, arguing it flies in conflict with the area's environment and its tourism and sport fishing interests. "The Niagara River is the future of the area's economy. Having CWM next to it is illogical."

•Lewiston resident Peter Dyshun, who argued that CWM's parent company Waste Management, in its administrative oversight of CWM operations, in fact has no liability responsibility to any potential problems that might occur at the CWM site in the future. "The community has to live with it forever," he said. "Those who profit (Waste Management) should step up and accept responsibility ... Waste Management should not escape the legacy of its landfills."

•Creek Road resident Gerald Acker, a lifelong Lewiston resident who spoke of decades of truck traffic and health concerns. Acker also asked why the siting board was primarily comprised of Albany officials with downstate interests and not county residents.

No response was to come.

Other residents told the siting board that DEC's actions in favor of CWM amounted to "cruel and unusual punishment."

There were, however, others who spoke in favor of the company.

•One was Youngstown resident John Battaglia, an engineer active in waste management remediation for 30 years, including at CWM. Calling CWM "a professionally run landfill facility," he commented, "I do not fear the landfill. I understand it. It's a well-run organization. Relocation is impractical."

Commenting on what she heard that day, CWM's Lori Caso said, "I heard a lot of misinformation. It's too bad that many of these folks haven't been to the site. It's been my experience that once people have seen exactly what it is that we do at CWM, they are much more comfortable having us in the community."

At this writing, the public commentary period to the DEC siting board remains open, at least until Sept. 5. Numerous arguments were presented Wednesday to DEC and the siting board to extend it, however no action was taken as of yet and it's uncertain on whether DEC would.

RRG's Henderson perhaps summed up the overriding sentiments heard that day when he asked administrative panel judge Daniel O'Connor, "Why are these hearings even going on? With all you're hearing, this expansion should not even be considered."

But as was the case from the siting board throughout the day, no response was to come.