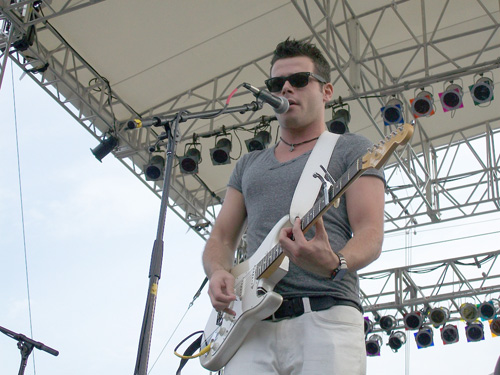 David Nolf is pictured performing at Artpark in 2012.

David Nolf to open for 3 Doors Down

"We just opened up for a band, USS, at Iron Works; two nights in a row sold out and that was pretty amazing. But lately we have just been working hard to get prepared for this big opening opportunity at Artpark next Wednesday," Nolf said Thursday. "Suddenly when a big show like this comes up, you have to stock up on CDs and merch, and make sure you have promotional tools ready in order to take advantage.

"We were nearly sold out of our previous EP "The Making Of" (available on iTunes), so we decided we needed to order more or try to release some new material. So we decided to record two new tracks, 'Mesmerize' and 'Lose Control.' And we took a few previously recorded, but unreleased tracks, 'Rescue Me Tennessee' and 'Dear Jonah,' then added a few of the tracks from our two previous EPs, 'One and One' and 'The Making Of,' and created our new release, titled 'We Say' (available on iTunes and Spotify Wednesday)."

Nolf performed at Artpark in 2012, opening for Huey Lewis & The News.

"Artpark is such a great venue," he said. "It's outdoors with a great view of the gorge, and a cool breeze that comes from behind the stage and cools us off. The natural bowl shape is cool, because we can see the huge crowd forming around the stage all the way to the back hill. The new stage they built two years ago is amazing, too. I remember playing years back when it was a wooden deck, and now (it's) a smooth gripped floor."

He said fans can expect an exciting show.

"We like to throw in a few covers that the crowd can sing back to us, and then hit them with some of our songs they are hopefully learning and humming along to," Nolf said. "We like to have a good balance of upbeat songs, and then take it down for a song or two and get people to really relate to the music."