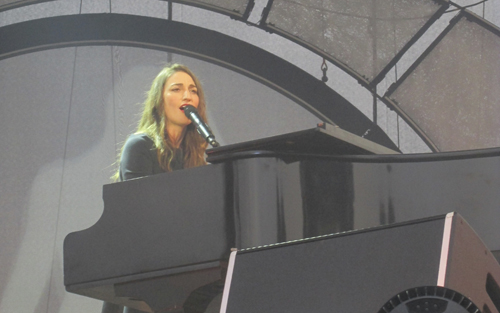 Sara Bareilles amazes fans with her personality and performance at Artpark

Review and photos by Allison Deutschman

Sara Bareilles made her debut at Artpark in Lewiston Wednesday as part of her "Little Black Dress" tour.

The ASCAP Pop Music Award winner and three-time Grammy nominee's concert series was appropriately titled. Bareilles can easily be described as classic and iconic, just like the garment that Coco Chanel referred to as a staple in every woman's wardrobe.

Bareilles' piano rock attracted a wide range of audience members, in the same way a LBD appeals to any woman regardless of style.

Groups of people - young and old, male and female, ranging from couples to friends to fathers and daughters - came from all over to enjoy Bareilles' fun stage presence and unfaltering voice.

Dedicated fans sang along in the rain, drenched after a torrential downpour during the first 45 minutes of the concert.

Bareilles noted the audience members' loyalty, stepping out in the rain during one of her songs.

The humidity and precipitation made Bareilles' hair frizz a little, providing the audience members with a reminder that she was human, too.

The singer's relatable personality is part of her charm.

Many celebrities try to portray a perfect lifestyle during their performances as well as social media, but Bareilles is honest and, quite frankly, she says you can take it or leave it.

She informed fans via Instagram that her tour bus broke down during the LBD tour, jokingly asking if anyone has a new one to rent.

Throughout the show, one could hear voices screaming, "I love you Sara!" or "Be my best friend!"

And sometimes the singer even responded, acknowledging a young boy named Andrew who was waving to her throughout the first song.

In an age saturated by autotuned voices and media buzz about lip-syncing, Bareilles' pure and honest singing and charisma is one of a kind.

Her lyrics are known for being straightforward and authentic, too.

Despite the youth present at the show, some colorful and profane language was used.

The singer did not apologize for it, but rather combined it with piano chords and a catchy rhythm to make it into a song.

Listen to her crowd-pleasing tune, "That Guy's an A......" for an idea of Bareilles' quirky blunt personality.

If that does not appeal to you, listen to one of her more familiar hits, such as "Love Song" or "King of Anything."

Bareilles' most popular song, "Brave," concluded her performance, before an encore.

It was a song Bareilles wrote about her friend's journey coming out about her homosexuality. It embraces being oneself despite societal pressures and the courage that being honest takes.

As the chorus of her hit song urges, "Say what you want to say/ And let the words fall out/ Honestly I wanna see you be brave."

No matter the context, Bareilles is unafraid to be herself with a loyal following of "Sara Bees" (as some of her groupies like to be called), hopefully other people will unabashedly be themselves, too. 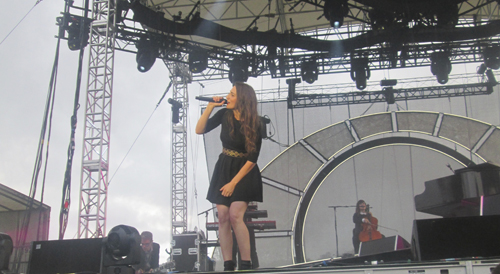