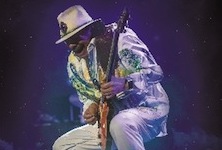 Seneca Niagara Casino & Hotel is excited to announce Santana will perform at Seneca Niagara Events Center on Saturday, Oct. 11. The Latin rock band, led by guitar legend Carlos Santana, typically plays at large stadium arenas, but will offer fans in Niagara Falls an up-close-and-personal show with just 2,400 seats and views no further than 100 feet from the stage.

The Seneca Niagara Events Center includes two jumbo-sized high-definition screens on either side of the stage to further add to the excitement.

Santana formed in 1967 and burst onto the global scene two years later with a performance at the Woodstock Festival - just around the same time that its first Top 10 hit, "Evil Ways," hit the airwaves. Since then, the band sold more than 100 million records and reached more than 100 million fans at concerts worldwide. To date, Santana has won 10 Grammy Awards, including a record-tying nine for a single project, 1999's "Supernatural" - highlighted by Album of the Year and Record of the Year for the song "Smooth." Other notable hits throughout the years have included "Oye Como Va," "Black Magic Woman," "Maria Maria," "The Game of Love" and "Why Don't You & I."

In 1998, Santana was ushered into the Rock and Roll Hall of Fame. The venue's website notes, "Guitarist Carlos Santana is one of rock's true virtuosos and guiding lights." Among many other honors, Carlos Santana received Billboard Latin Music Awards' 2009 Lifetime Achievement honor and also was cited as No. 15 on Rolling Stone magazine's list of the "100 Greatest Guitarists of All Time." Just last year, he was the recipient of the Kennedy Center Honors Award.

Santana's lineup for upcoming shows this fall includes a "classic" cast of members from the original band, many of whom performed at the Woodstock Festival. The band also released its 22nd studio album, "Corazón," this past May. 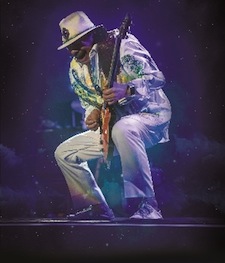