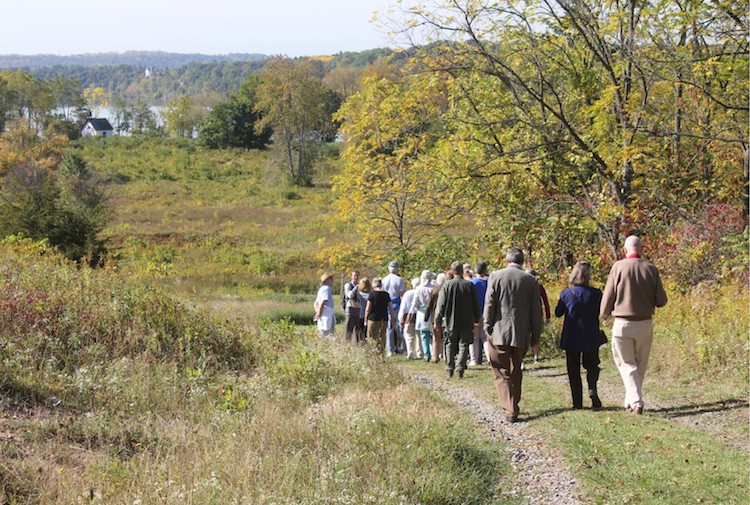 The Western New York Land Conservancy has been awarded $300,000 to help create the Stella Niagara Preserve on the Niagara River in Lewiston. The grant is from the U.S. Fish and Wildlife Service's Great Lakes Restoration Initiative through the Joint Venture Habitat Protection and Restoration Program. The Land Conservancy has now received more than $2.6 million of the $3.2 million needed to create the preserve.

At 29-acres and more than a quarter mile of shoreline, it is the largest remaining, undeveloped, privately owned property along the Niagara River. Once the property is acquired, the Land Conservancy will open it to public access with walking trails, fishing access, and a place to put a kayak in the river.

"We are so grateful for receiving this significant award, and we are thankful to the Sisters of St. Francis for working with us to protect the property in perpetuity," Smith said.

U.S. Fish and Wildlife Service Midwest Regional Director Tom Melius and Northeast Regional Director Wendi Weber jointly announced the $300,000 award at the end of June. The grant was one of five grants given in the midwest and northeast region, for a total of $960,000, all aimed at protecting, restoring and enhancing 908 acres of wetlands and wildlife habitat.

The Stella Niagara Preserve was the only project selected in the northeast region.

"The work accomplished by Joint Ventures draws attention to the power of working across regions with local partners to permanently protect areas that are important to our waterfowl, shorebirds and landbirds," Melius said.

The Joint Venture program strives for sustainable populations of all birds through regionally coordinated conservation actions based on the best scientific information and techniques available. Explicit bird population goals, decision tools, and an implementation plan are used to guide resources for efficient conservation delivery, research and evaluation.

"Undeveloped areas along the Great Lakes are some of the most important places in North America for migrating birds," Weber said. "This initiative supports local land protection efforts and leverages funding to conserve the nature of the Great Lakes for wildlife and for people."

"Protecting the Stella Niagara Preserve property is part of a broader strategy to protect wildlife habitat along the Niagara River," said DEC biologist Tim DePriest. "The river supports several threatened species of plants and animals, like the bald eagle and lake sturgeon, and is home to hundreds of thousands of migratory waterfowl and gulls during the winter. With this recent grant award, it is wonderful to see the Stella Niagara Preserve project so close to fruition."

The Land Conservancy is seeking the remainder of the funding from local businesses, foundations, private donors and other funding sources. To donate to the Stella Niagara Preserve, contact the Land Conservancy by calling Smith at 716-687-1225 or emailing [email protected].

For more information on upcoming events, volunteer opportunities, or the mission of the Western New York Land Conservancy, call 716-687-1225 or visit www.wnylc.org.