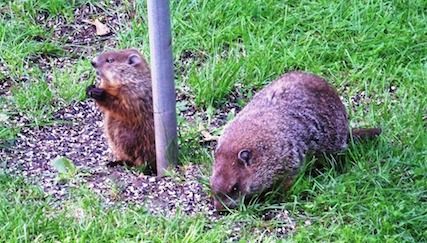 A whistle pig mom with her kit.

I'm not talking about the whistle pigs we've all had at one time from the old "Page's Whistle Pig" on the six corners in Niagara Falls. Those pigs were good for you; that hot dog, slit down the middle, cheese laid neatly in, then wrapped in bacon, grilled, then placed neatly into a nice fresh bun - that all had to be good for you.

Another kind of whistle pig is a cute, destructive animal/rodent more familiar to all of us as the non-aggressive groundhog or woodchuck, like Punxsutawney Phil that promoters claim to be "the only true weather forecasting groundhog. The others are just imposters." Maybe referring to Ontario's Wiarton Willie?

Groundhogs, AKA woodchucks, are sometimes called "whistle pigs" because of their extremely loud whistle, sent out when danger is approaching, or when calling its young, warning them of danger. The first time I noticed the loud whistle, I was just walking down the driveway and a momma spotted me before I did her. She let out a deafening whistle that brought her brood back pronto to their burrow under my shed where they all knew it was safe.

Momma takes her kids out on excursions to feed in the mornings and late afternoons mostly, but it's not odd to see them throughout the day, such as in the photo you see of a mother groundhog and her cub (called a kit). It appears they were feeding on birdseed just below my bird feeder. I always thought groundhogs ate grass, clover, broad leaf flowers, and things like that, as they need that to sustain their body water. By chewing greenery, it gives them enough water to keep them going, as they do not need drinking water to survive. This mother had two other kits with her, not shown in the photo.

If they don't see you first, stomp your foot on the ground and they'll feel that vibration and take off for cover. The young aren't as skittish; they'll look at you then decide if they are going to run for cover.

Groundhogs can give us a lot of problems, not just gardeners and farmers. If you have a crawl space under an out-building of some kind with a post type foundation, somehow they'll get under there and burrow down alongside of the pillar-post causing the structure to tilt. They will dig down below the frost line, four or five feet, and then build huge escape tunnels from there. Being industrious, it is documented those routes can extend up to 45 feet long.

Groundhogs hibernate in the winter in those burrows and start their families in separate burrows around March and April. Then after a few weeks the little ones get bold enough to venture out with mom. They also learn to start foraging for the proper food to eat along with their survival skills.

According to the state department of Environmental Conservation, groundhogs are an unprotected species and may be taken at any time without limit, but you do need a hunting license if using a firearm or bow. If you find them to be a nuisance around your property, you could be in a heap of trouble. You can't shoot them if your local laws disallow the discharge of firearms in residential areas, and if you can trap them you can't release them somewhere else because you could be transferring your troubles to some other property owner.

So what do you do? If you could shoot them, the law says you have to bury them on your own property. It's like being between a rock and a hard place.

There is one legal alternative. If you have a lot of money, you can hire a nuisance wildlife control operator (NWCO) to come and get them out of your yard, whatever he does with them is a mystery to me. When my yard around here gets overrun with them, I have a secret routine, and I'm sorry I can't share it with you. Oh, and they can swim.

Yes, they are edible but you need to follow instructions by the word if you intend to. They have scent glands under their forearms and their small of the back that can ruin the whole pot of stew or the grill if you don't know where it is or what it looks like. Hunters around here generally take them for their fur. Some people even keep them as pets, like guinea pigs, or gerbils. If you think you need to eat one, Google a woodchuck recipe from down south, its regular table fare to some of the southerners.

About 25-30 years ago, a friend of mine was driving back from Florida and stopped in a grocery store in Tennessee and saw a bright red label with a groundhog picture on it, and it was canned groundhog. On the label it said, "heat and serve." He looked at it and thought; "I should buy this and bring it back to Mark." He did, and I still have it, waiting for the day I fall off my rocking chair because of starvation. Hopefully, I'll be too weak to operate a can opener. I don't think they'll be as tasty, and as a good old Page's Whistle Pig!

The mute swans I wrote about a couple of weeks ago are part of the big time news now. Just today, at Sentinel deadline time, I received an email from a reader who lives in Rochester, who wishes not to be named pertaining to that story. He found the story on the Sentinel's website. The reader sent links to stories that appeared on the Watertown Fox News channel Monday, June 23, and the New York Daily News, dated June 20. The Daily News headline read, "DEC officers charged with going on mute swan 'killing spree' as lawmakers voted for their safety." It appears three NYS DEC officers took it upon themselves to enforce a law that was not on the books yet, only a proposal, to eradicate the mute swan from New York state. There were several witnesses that saw the incident happen. Fox News said, "Four baby swans were nearby when the adult swans were shot and they worry they won't survive."

Sen. Tony Avella, D-Queens, expressed outrage that DEC officers shot two of the birds at an upstate park on Tuesday - the same day the Senate voted to enact a two-year moratorium on the state's plan to eradicate the swans.

After DEC officials were questioned about this event, a prepared statement with their answer was, "DEC was carrying out a long-standing protocol to manage this invasive species that threatens other species in this sensitive habitat."

After all is said and done, the DEC is not infallible and they do make mistakes sometimes, not often, just sometimes, and this is one of them. At least according to the Daily News headline, the officers were charged.

Thank you Rochester reader for the heads up and thanks from all our readers. I'm sure more sad news will be coming from this, unless it gets kicked under the rug like so many major world things do today.

•So the story goes, Punxsutawney Phil was named after King Phillip. Prior to being called Phil, he was called "Br'er Groundhog."

•A little while back there was a GEICO TV commercial where two woodchucks were tossing, or chucking cut and split wood into a pond. As the farmer came along he yelled, "Hey you woodchucks, quit chucking my wood!" The woodchucks were having a ball, but before they ran off, they just had to pick up one more piece and toss that too.

•So Smart sez: Unlike humans, fish don't have 3-D vision. That's because their eyes are on the opposite sides of their heads. Think about it.