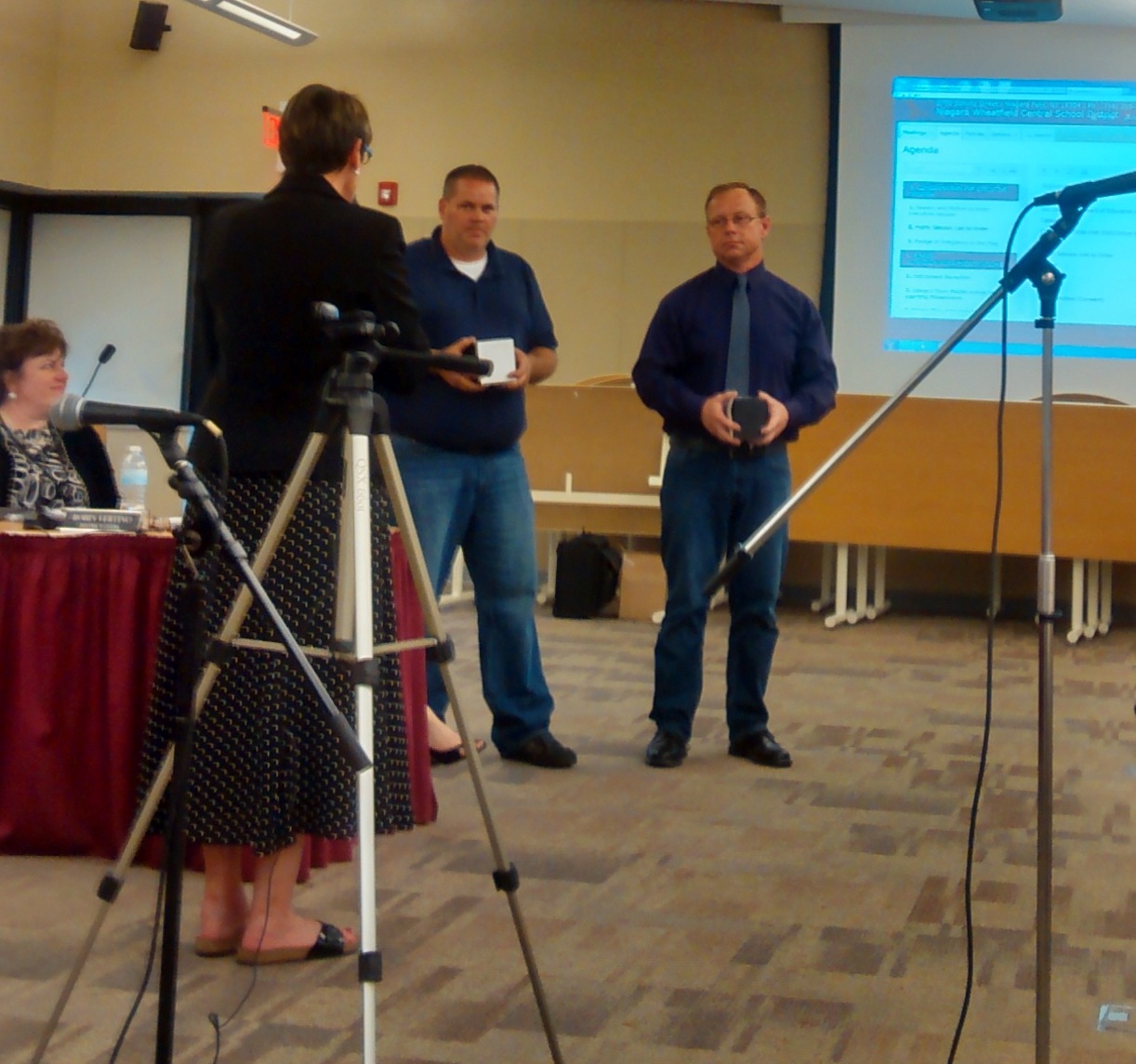 The June 18 Niagara-Wheatfield Board of Education meeting was a night of "beginnings and endings, from celebrating retirees and graduates to welcoming aspiring youth."

These were the words of Jake Schoelles, the ex-officio student member of the Board of Education who will be replaced in the upcoming school year by Joshua Ranney.

Beginning with Schoelles, there will be a plaque hung in the high school on which each of the ex-officio student board members' names will be placed.

N-W Superintendent Lynn Fusco said of Schoelles, "You showed a willingness to take a risk and handled yourself with diplomacy, decorum and confidence."

A retirement reception was held to honor all those who have served the N-W school district, followed by personal presentations on each staff member's loyalty, strong work ethic and commitment to the community as a whole.

Fusco personally thanked exiting board members David Breier and Richard Halleen stating, "I have a poster in my office that talks about leadership, and leadership is easy when the seas are calm, when you have enough on your ship to get you to your destination. Leadership - true leadership - is how you handle yourself in the storm and how you weather the storm and bring the ship into port. I want to thank you both for your true leadership."

As Palka stated, this program teaches children about "service learning on their own terms and gives students a choice in being able to affect the world." The students were put to the challenge of researching a need in their community, drafting a plan of action and then implementing that plan. The children raised funds and awareness for the Ronald McDonald House, the Food Bank of WNY, St. Jude's, the YWCA, SERV Niagara and many more. One parent said that her son Adam Muzzi's involvement in SERV Niagara, supporting veterans in need, became an entire family effort.

•N-W resident Rosemary Warren reiterated the importance of bringing back and funding the "life" sports that people can enjoy throughout the years, including tennis, golf, swimming and bowling.

•High School Principal Timothy Carter presented an in-depth look at some of the changes coming at the state level regarding graduation requirements referred to as the "pathways to graduation." There are now, six different "paths" that a student can take to exit high school with a diploma. The ninth-graders beginning in the fall of 2014 will be required to follow these new requirements. The overall goal is to have the students either "college ready" or "career ready." The six paths are: traditional Regents diploma; local diploma; for students with disabilities, a Regents diploma or a local diploma with a C-Dos (career credential with a number of hours of on-the-job training; for students with disabilities, there also is a diploma with a C-Dos alone and a "skills credential" option. This is for students who may not have a specific career in mind, but have certain skills that are marketable in the workplace.

For state exams in terms of graduation requirements, the number of credits has not changed nor has the number of required exams - math, science, English language arts, global, and history and geography. What has changed, though, is that all instruction and assessment will now be aligned with the Common Core, which will now be a graduation requirement. When the ninth-graders of 2014-15 enter 11th grade, the traditional 11th grade ELA assessment will be replaced with the Common Core ELA assessment. For the fourth-graders in 2014-15, their pass rate for state exams in order to graduate will no longer be 65 percent. The current Board of Regents is proposing an ELA pass rate of 75 percent and math at 85 percent.