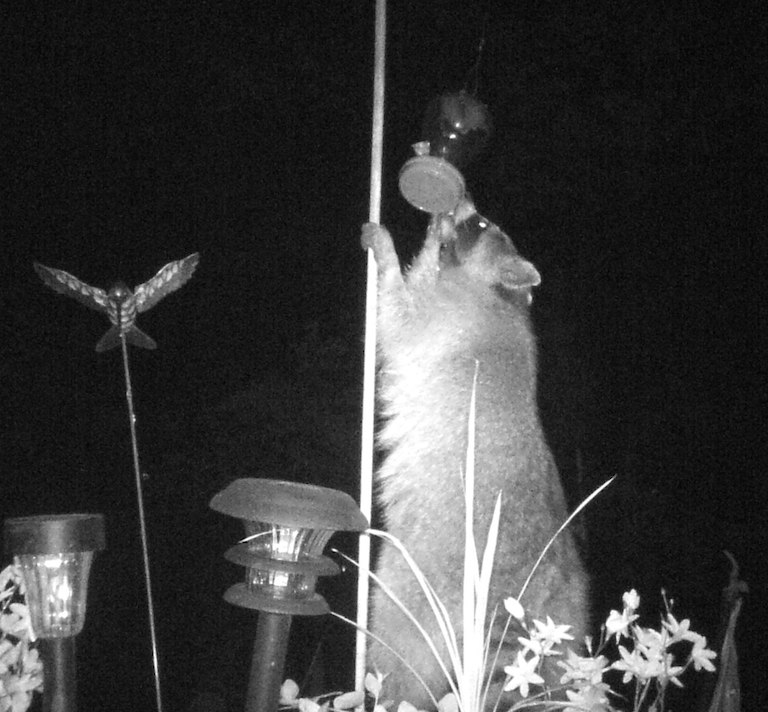 The picture you see here is a 'coon drinking the sweet water from the hummingbird feeder on my back porch. It had been hanging there for about three to four weeks, and when the hummingbirds came back it was a happy feeder.

That was when it dawned on me that something was getting up there to help itself. I replaced my good feeder with a spare I had in the shed, filled it up, then got my trail camera and aimed it at the feeder. Sure enough, there was that thieving little critter, tipping the feeder like he was drinking from a soda bottle through the feeder hole. He climbed up on the porch railing, then stood on the edge of the flower box and reached over to grab at the feeder. Needless to say, he enjoyed the hummingbird's sweet nectar. (Twice)

So came the need to see if I could outsmart that raccoon so he won't come back and steal the hummer's sweet water. With the feeder brought in the house at night, my trail cam picked him up the next two nights searching for more nectar to steal but it wasn't there. I kept my camera on the area for three more days and apparently he learned there was nothing there for him. Smart critters.

There are good raccoons and bad raccoons, and then the very smart critters. They are thieves actually day or night. In our family camping days, it seems raccoons were always the camp entertainment of the evening and sometimes day. Food had to be secured, because they would come around through the night and eat anything left out in the open. Sometimes that was good. Around the nightly campfire there was always a couple melted marshmallows the kids dropped in the dark or a piece of a hotdog or bun, and in the morning, anything edible was cleaned up. Living vacuums!

Tent camping was our forte. Sometimes, not often, we would rent a cabin somewhere. Cabins were nice, especially on those cool rainy periods. But roughing it in a tent with five kids, a wife, a collie-sized dog and trailering the fishing boat was much more of a challenge. We all had army surplus fold-up cots and warm bedding, but the sounds through the night were awesome, especially when you could hear the raindrops of the night falling on the canvas roof. You wished you could lay awake all night and just listen to them, but you couldn't, the sound was so soothing it would put you fast asleep, no matter how hard you tried. You could wake up and listen to the raccoons and skunks roaming outside around your campsite, and sometimes you would hear things that you really didn't want to know what it was roaming around out there on four legs.

When tenting, the first thing you would hear in the morning would be the birds waking up, and everything coming alive, which you don't hear in a cabin. Then if you are camping on a lake, which we always did, you can hear the fishermen, and small motorboats getting ready for a day of fishing, then you could hear those motors getting farther and farther away in the distance across the lake or down the river as they leave. We never got on the water that early because coffee and breakfast had to be made, especially for the kids when they got up and they started their day. As I sit here putting this story together, I think I can actually smell the early morning wood fire, the coffee perking, and the bacon cooking in the pan on the Coleman stove that used white gas to work.

I want to elaborate a little more on these thieving raccoons, as they are a fantastic and entertaining creature of God. They are smart, quick to make decisions, quick to learn how the get into and onto things, and how not to starve, by begging and thieving. Sometimes when sitting around the campfire at night, they will smell the marshmallows cooking off from a distance, then sneak up right behind you and you would never know it until it came out of the dark into in the light of the campfire, staring at you with that cute face that wore the familiar black mask.

He is talking to you without saying a word. He wants some marshmallows! You give him one, now all of a sudden he is everybody's friend, and walking around the campsite like he owned it.

We had an old blue metal Pepsi cooler with a twist lock latch on it. It was a good one that critters couldn't get into to eat our bacon and especially the eggs. One warm day when the camp was quiet and the kids were at the beach swimming, I was sitting at the camp picnic table having a cold brewski watching one of these thieves roaming around looking for something to eat. He strolled right over to our side-latched metal cooler, sniffed it, circled around, stood on it, got back down on the ground, and I'll be damned if he didn't play with that latch all the while with me silently laughing at him, until he figured how to open it. I couldn't believe my eyes. After fooling with the latch, and finally twisting the latch, he actually lifted that lid wide open, and started looking for the best stuff. After I chased him away, I double wrapped a rope around the whole cooler so he couldn't do that trick anymore.

Without a doubt, if you live near any wooded area, you have raccoons roaming around your yard at night too, you don't see them, but bet on it, they are there. I always knew they roamed my yard and the yards around here. We live near the woods and the lake's bank, where they like to stay. It is likely to see them through the day, but they are nocturnal and roam and generally feed at night.

•Some raccoons are carriers of the rabies disease and should be left alone especially during daylight hours. Do not feed, touch or adopt raccoons or any other wild animal, such as feral cats.

•Everyone should have a trail cam if you want to see what's going on in your yard when you are sleeping or away from home. It is a blast to see the wildlife up close. You can buy them in almost any sporting goods store that sells hunting equipment, or on the 'net. Mine is a "Moultrie" game camera, and it was recommended to me by 3F Club member Ernie Calandrelli, who is a national, and state turkey calling champion, charter fisherman and hunting guide. I think I paid around $80 for mine. You don't need a $200 one for doing this.

•Renting a campsite in a state park is not too hard on the pocketbook. First, there is a reservation fee of $9 then each night spent there is a basic fee of $15 per night. That includes flush toilets, and showers.

•You can purchase a darn good modern and sturdy camping tent today for anywhere from $50 to $125, and use it for years.

•In next year's proposed state budget, 2014-15 are reduced fees for seven-day fishing licenses, from $13 to $12 for residents and $31 to $28 for non-residents; and an increase in the number of authorized statewide free fishing days from two to eight.

•Also new for 2014-15, crossbow hunting for hunters 14 years of age or older for small game, and for big game throughout the firearms seasons and during portions of archery season.

•If anyone knows where I can get to a patch of wild leeks easily, let me know, I'm overdue for a fill-up.

•So Smart sez: Wondering what the temperature is but don't have a thermometer? Count the number of chirps a cricket makes in one minute, and then add 40. The sum will be very close to the outside temperature.