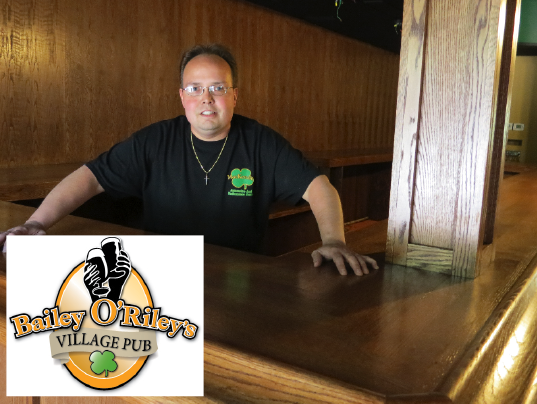 A new local restaurant is set to open next month in a familiar spot, at 840 Center St., in Lewiston.

Bailey O'Riley's Village Pub will be located at the former site of The Lewiston Village Pub. Restaurant owner Chris MacKenzie has made in-depth renovations and is confident his eatery will be a positive addition to the Village of Lewiston.

"We removed the entire bar, the floor, the wall that separates the dining area from the pub. Turned it into a dry bar," MacKenzie said. "So that it's all a wide open atmosphere."

The stage has been updated and made more band-friendly. Customers in the dining area as well as at the bar can enjoy a clear view of the stage from almost any spot. The performers will now be visible at all angles thanks to the removal of the former TV wall.

Behind the scenes, the kitchen has been expanded and floor drains were added.

These improvements, combined with new staff and an extensive beer and wine selection, will make Bailey O'Riley's different from other Lewiston eateries.

MacKenzie said he is very focused on making Bailey O'Riley's a welcoming venue. He wants to attract everyone - including one of the former Pub owners, Ed Webster, whom MacKenzie credits with building a successful establishment. MacKenzie said Webster might bring his beer club and card games back to his former business. Webster already left his stainless steel taps, a familiar fixture, for MacKenzie to use.

MacKenzie hopes that by expanding upon the positive attributes The Lewiston Village Pub already had, faithful customers from before will feel invited to return.

He plans to hold 35-cent chicken wing night on Wednesdays, make clams available every Sunday, hold dart games in the back room and offer intimate music and entertainment on stage.

MacKenzie wants new patrons to enjoy the restaurant. He said there would be a different atmosphere and earlier close times to ensure the right patrons are welcomed, and the wrong ones are discouraged.

MacKenzie is taking more measures to stop underage drinking. Those under 21 will not be allowed in Bailey O'Riley's after 9 p.m., and there will be added security measures to insure a relaxing, safe environment.

By using the names of his children, his daughter Bailey and son Riley, MacKenzie wants to convey a family-friendly tone that also picks up on the Irish/Scottish theme of the restaurant.

Traditional staples such as shepherds pie and corn beef and cabbage will be served, as well as a variety of pub-style foods.

"It's there for all to enjoy," MacKenzie said. "Between the dinner menu and the pub menu, and just the environment that is going to be created in there, I think a lot of people are going to be very happy with it."

MacKenzie said he was attracted to Lewiston's atmosphere. He's embraced the small shops and rustic feeling that will surround his business.

As the owner of MacKenzie's Automotive in Niagara Falls, Chris prioritizes his involvement in the Western New York community.

He said his 17 years of experience with Darden restaurants and his successful MacKenzie's Pub in Beaumont, Texas (which he owns with his father), will help Bailey O'Riley's to succeed.