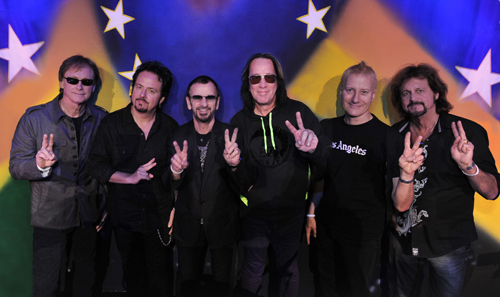 Ringo Starr & His All Starr Band perform Tuesday at Artpark in Lewiston.

I recently had the opportunity to interview Todd Rundgren, the musical genius who will visit Artpark Tuesday as part of Ringo Starr's All Starr band concert (6:30 p.m.)

Here is a candid look at his views on some intimate questions.

Sophia Smith: Did your parents encourage you in your musical endeavors and believe it was a solid and real future for you? Or were they more pragmatic, advising you to become an attorney or a teacher?

Todd Rundgren: In retrospect, my parents had a lot to deal with, and few resources, so encouraging an underachiever to go to law school wasn't anywhere on the radar. I had no interest in higher education anyway.

Sophia Smith: Other than being the musician/rock legend who you are, what would be your ideal job?

Todd Rundgren: I like to play with computers. If I could get paid a lot of money for that, could probably craft a normal lifestyle.

Sophia Smith: In your opinion, do you think most humans have the capability to excel at music, or is it strictly a gift for the musically inclined?

Todd Rundgren: I'm pretty sure not just anyone could be happy as a musician. Even if you take the potential commercial success out of it, sometimes musicians remain miserable despite the adoration. There are other ways, maybe more personally suitable ways to express yourself.

Sophia Smith: My brother is a massive fan of yours and he has seen you many times. He recounts fondly his favorite concerts of yours not being one in a big arena, but in a small venue consisting of just you and a tape recorder. What is your personal favorite way to perform?

Todd Rundgren: It's a dreadful future if you think that every day and every night is predictable. I hope I don't get locked into either.

Sophia Smith: Is the energy and euphoria you get from touring worth all the hassle and loneliness of being on the road in possibly lackluster hotels with lackluster meals and lackluster company? Is the touring for you a strictly lucrative endeavor, or is it more?

Todd Rundgren: Touring and performing are mashed together as if they were the same thing. The best way to tour, the ideal, is to travel as little as possible, and therefore not waste energy that should be spent performing.

Sophia Smith: You have a birthday coming up on June 22, same day as my mom. Are you doing something special to celebrate? Or will this just be another day on the road?

Todd Rundgren: Since I'm on the road with the All Starrs, they will attempt to surprise me. They will fail.

Sophia Smith: You formerly lived in NYC, and then upstate New York, where your prized guitar collection was stolen and your home was burglarized. Was your move to Hawaii prompted by this? Or was it strictly you wanting to inhabit the most beautiful place you could find and still be in the U.S. with your family and to keep them safe at the same time?

Todd Rundgren: In reality, those events are not connected. However, there's probably an element of destiny in the move to Kauai. I had been vising regularly since the '70s, and after Hurricane Iniki, a lot of factors came together that ultimately made the move almost inevitable.

Sophia Smith: Do you ever attend live concerts? Is there one artist or genre you follow? Do you always get a backstage pass and see a concert from that POV? Or do you ever watch a show from the audience, which is obviously a completely different (and more real) perspective?

Todd Rundgren: I just attended a festival in NorCal called Bottle Rock, which had a lot of anticipated headliners like The Cure and Outkast. Have to admit that it's a much different experience on the outside. By the time the last act was on, I was cold and miserable, which had nothing to do with the performances. Yes, I'm much happier backstage.

Sophia Smith: What is your greatest lament about the current music scene? Do you think it is all pop spoon-fed cotton candy content? Or is there real talent and avant-garde executions out there to be discovered if one only tries hard enough?

Todd Rundgren: There is always something going on at the fringes. Not everyone is fixated on the same kind of success. Sometimes the further from the mainstream, the more freedom you have to experiment.

Sophia Smith: You wrote your autobiography four years ago, "A Wizard A True Star Todd Rundgren: In The Studio with Paul Myers," but surely you are still creating music and experiences. Do you see yourself writing another tome in the twilight of your years someday? Perhaps more of a professorial guide to future musicians or tongue-in-cheek tell-all?

Todd Rundgren: I've been supposed to write a real autobiography for almost two decades. I have bits and pieces, but the process seems like homework to me. Eventually I'll knuckle down and finish at least the first 50 years of documentation.

Sophia Smith: What is your favorite thing to listen to when you're not working? What is on your iPod?

Todd Rundgren: I'm a Rhapsody user, so any time I hear something I like, I go there first and listen to the latest releases. Actually, I think the last thing I downloaded was the original cast recording of "Sunday In The Park With George," which isn't new at all.