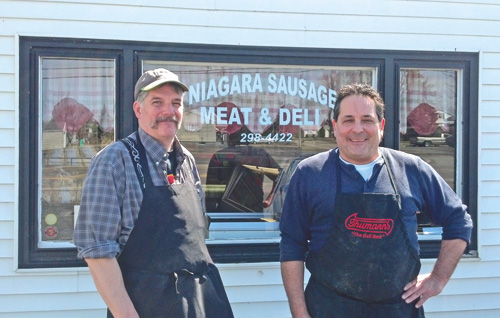 Norm Schneider and Bryan Lozinsky are partners in Niagara Sausage Meat & Deli on Lockport Road in the Town of Niagara.

Bryan Lozinsky of Lewiston and Norm Schneider of Getzville met while working together over the years as meat cutters for area grocery stores.

About five years ago, the two friends started making their own sausage out of their homes for family, friends and for sale.

"That got too big, so we decided to open up a place and work for ourselves," Lozinsky said.

The result was Niagara Sausage Meat & Deli at 5611 Lockport Road, just west of Military Road, in the Town of Niagara.

The partners, who have more than 35 years experience in the meat business, still specialize in sausage - specialty sausage, chicken sausage and Italian sausage in a variety of flavors, as well as smoked and fresh Polish sausage.

As they celebrate their first anniversary, Lozinsky and Schneider believe going out on their own and starting a business was a very good decision. Business is good.

"We're pleased with the way things are going," Lozinsky said. "We're not driving Harleys or brand-new Mercedes, but we're paying our bills."