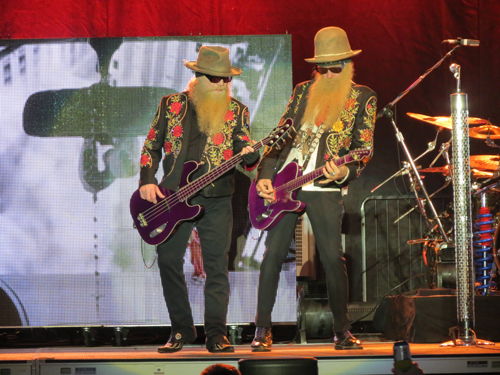 ZZ Top with Jeff Beck to Perform Outdoors in Salamanca

During its 10 years of success, Seneca Allegany Casino & Hotel regularly hosted outdoor concerts until the opening of Seneca Allegany Events Center in March 2008. This summer, the spirit of the past returns in full force with an outdoor performance by ZZ Top with Jeff Beck Friday, Aug. 29 at 7 p.m. Tickets start at $25 and go on sale Monday, May 12, at noon.

ZZ Top's songs are ideally suited for celebrating summer, with classic rock anthems "Legs," "Cheap Sunglasses," "La Grange" and "Sharp Dressed Man." The famous bearded trio was inducted into the Rock and Roll Hall of Fame in 2004 and has sold more than 50 million albums worldwide, including 18 Platinum and Gold records.

In Salamanca, they will team with fellow Rock and Roll Hall of Fame member Jeff Beck, who was ranked No. 5 on Rolling Stone magazine's list of all-time greatest guitarists.

Independence Day weekend will rock at Seneca Allegany Events Center with the addition of Survivor on Saturday, July 5, at 8 p.m. Tickets start at an affordably priced $15 and go on sale Friday, May 9, at noon. The group is best known for the No. 1 hit "Eye of the Tiger" in 1982, which was the theme song to the classic film "Rocky III." The band also produced the chart-topping hits "I Can't Hold Back" and "The Search Is Over," and wrote the song "Burning Heart" for the film "Rocky IV." Last year, Survivor announced the reunion of both lead singers throughout the years, Dave Bickler and Jimi Jamison, to allow fans to hear all of the band's songs in true form during live shows.

On Friday, Aug. 22, at 8 p.m., Seneca Niagara Events Center will be filled with romantic ballads as Air Supply takes the stage. Tickets start at $30 and go on sale Wednesday, May 14, at noon. The Australian soft rock duo of Russell Hitchcock and Graham Russell penned Gold-certified hits in the early 1980s with "All Out of Love," "The One That You Love" and "Making Love Out of Nothing at All." The band achieved additional success at the No. 1 and No. 2 chart positions with the songs "Here I Am," "Lost in Love," "Every Woman in the World" and "Even the Nights Are Better."

The 440-seat Bear's Den Showroom at Seneca Niagara Casino & Hotel will provide the perfect setting this summer for two intimate performances by Grammy Award-winning music acts. On Friday, June 27, at 8 p.m., "Scott Stapp: The Voice of Creed" comes to the venue, delivering some of the most popular hard rock songs of the 1990s and 2000s, including "With Arms Wide Open," "Higher," "My Sacrifice" and "What's this Life For."

Tickets start at $45 and are on sale now.

On Friday, Aug. 22, at 8 p.m., American Chicano band Los Lobos takes the stage for a high-energy, Mexican-infused performance. The band achieved its greatest success in 1987 with the soundtrack to the film "La Bamba." The title track reached No. 1 on music charts worldwide, and additional commercial success followed with covers of the Ritchie Valens classics "Donna" and "Come On, Let's Go."

On Sunday, Sept. 7, country star Kellie Pickler comes to Seneca Allegany Events Center for a 5 p.m. performance. Tickets start at $25 and go on sale Wednesday, May 21, at noon. Far removed from her days of catchphrases such as "pick Pickler" during the fifth season of TV's "American Idol," the 27 year-old Pickler is now building a career as a singer-songwriter. Her first two albums soared to No. 1 on the Billboard charts, and the songs "Red High Heels," "I Wonder" and "Best Days of Your Life" all received industry awards.

In 2013, she proved that her talents stretch beyond singing, as she won the 16th season of the hit reality-competition TV show, "Dancing with the Stars."

Seneca Niagara Events Center will kick-off fall entertainment with one of today's most successful comedians, as Brian Regan comes to Niagara Falls as part of a 48-city tour of North America. Tickets start at $25 and are on sale now.

Regan first broke into stardom with an appearance on "The Late Show with David Letterman" and has since performed more than two-dozen times on the show. Jerry Seinfeld calls Regan "one of my favorite, favorite stand-up comedians." Regan is known for sidesplitting materials on everyday topics, while maintaining a clean routine without profanity. He also recently earned a nomination for Best Club Comic in this year's American Comedy Awards.

Tickets for all shows will be available at Seneca Casino box offices, www.Ticketmaster.com, all Ticketmaster locations or by phone at 1-800-745-3000.