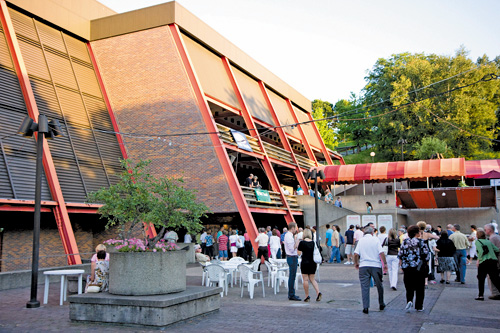 Town of Lewiston Supervisor Dennis Brochey and Artpark & Company officials are debating whether Modern Disposal tipping fees should continue to support family programming at the village venue, as shown below, or revert back to town coffers. (file photos)

Town of Lewiston: Brochey, Artpark at odds over town funding

Artpark: Loss of tipping fees would be 'a promise broken'

by Terry Duffy and Joshua Maloni

Supervisor Dennis Brochey created a firestorm Monday as he revealed his intent to redirect an estimated $120,000 in Modern Disposal tipping fees from Artpark & Company back to town coffers. The money, which Lewiston receives annually, has gone to help fund Artpark & Company's family programing.

Brochey's announcement was met with discord Monday from Lewiston Town Board members and has riled the Artpark & Company board. Speaking after the meeting, he said it all boils down to the town's pressing needs and its troubled financial picture.

He said that, over the past 11 years, the town has contributed $1.3 million toward Artpark & Company's children's programs. He said his intent is not to spite Artpark & Company, but to improve town finances.

"I'm not debating it was a bad decision to help Artpark, especially in the beginning," Brochey said. "But I just pulled out the 2012 report from Artpark (the latest available). It showed they made a $1.3 million profit in 2012. The year before it was $140,000. They did an outstanding turnaround."

He said the same can't be said for the town, which now finds itself in tough financial waters and facing the prospect of imposing a town tax for the first time in years.

"My concern is not where the (Artpark) funding is right now, but what we have to have repaired in the town," Brochey said. "My issue is that our senior center needs a new roof; our sewer department (building) needs a new roof; we don't have an air conditioning system at the senior center; and there's a $600,000 (waterline) project that needs to be done in front of Lewiston-Porter High School."

John Camp, Artpark & Company's board chairman, said Artpark officials met with Brochey Feb. 6. At that time, "We offered to reimburse the town for all their out-of-pocket expenses associated with (2014) Artpark concerts."

However, Artpark & Company took issue with the 2013 police cost estimate, which Camp said was $55,000. He challenged the line-item expenses.

"Those numbers appear to be inflated," Camp said. "I recall the time that almost 50 percent of that cost was attributable to fuel for vehicles, which strikes me as odd, because you'd have to be traveling over 100,000 miles collectively, and we're not really doing a lot of driving directing traffic.

"What I said to Dennis at the time was, 'Our board would be happy to reimburse you for the true out-of-pocket expenses, but I think we need a little more substantiation to what those numbers are.' "

Brochey said that, according to numbers he received from Lewiston Police Department Chief Chris Salada, it costs $64,000 annually for crowd control - particularly for Tuesday and Wednesday concerts. Typically, LPD has more than a dozen officers working the Tuesday and Wednesday shows, along with supplemental officers from the Niagara County Sheriff's Office, State Parks, State Police and civilian forces.

Town Councilman Ron Winkley, a former LPD chief and recent Artpark board member, challenged the $64,000 figure. He was quoted in another newspaper as saying it's closer to $42,000.

Camp disputed Brochey's 11-year total. He said it's not right to compare the current crowd control expenses with the costs from a decade ago.

"To take the 2013 number and go backwards in time is not really a proper way to do that," Camp said. "Because, as you know, Artpark concerts 10 years ago were nothing compared to the size of the crowds that we have today. So, the traffic control requirements 10 years - even probably five years ago - is significantly less. So it's kind of disingenuous to take the 2013 number and say that's the number for the last 10 years.

"I think those numbers are a bit overinflated, but, again, the offer still stands that we will reimburse the town for all their true out-of-pocket expenses."

Camp said Brochey wants more than that for the town.

"He said, 'That's not good enough. I'm going to have to reallocate these tipping fees,' " Camp said.

The Modern Disposal money given to Artpark & Company was specifically earmarked for children's programming. The funding was designed to help Artpark & Company offset the cost of activities and events that don't generate any revenue.

"These types of programs do not make money. They lose money," Camp said. "But they're for the betterment of the community. They enrich peoples' lives. This is our art camps and theater camps and music camps and other things that we do in the park that we don't charge admission for. It's, at the end of the day, this is not a profitable venture for us to put on these programs, yet we view it as a key part of our mission statement."

Camp said the tipping fees were taken into consideration when Artpark & Company created this season's budget. If the town doesn't restore that money to Artpark & Company, "our board would view that as a promise broken."

"This loss of this money is a pretty severe blow to the funding of those programs," Camp said. "We're going to have to re-evaluate what we can continue to provide.

"We do think it's fair, given the situation, that we try to help out the town to reimburse the out-of-pocket expenses for the police. But I think we all feel that this is more of a drastic step in allocating all of these tipping fees to the benefit of the town.

"It's an unfortunate situation."

"If we don't get those funds, we'll have to write that off, which will be even further detrimental to our profit-loss statement for this year," he said.

Brochey said the decision to pull the tipping fees away from Artpark & Company is permissible under the town's agreement with Modern. If the money goes to Artpark & Company, "It says it must be used for children's programming," Brochey said. "(But) in the last paragraph, it specifies 'the Town of Lewiston can take this for their own recreation department.' "

"If we used that option every year, to keep that for ourselves, it would definitely put the Town of Lewiston in much better financial structural shape," Brochey said. "That $1.3 million would have put us in really good shape all these years."

Brochey said the Village of Lewiston, where he served as a trustee the past two years, likewise finds itself strained in helping fund Artpark & Company programs and police staffing costs. He noted village trustees recently approved a tax rate increase for 2014-15.

"The village is suffering at the same time," he said.

The Town Board requested Artpark & Company provide audited financial statements and documentation to Brochey and the councilmen prior to the April 28 Town Board meeting.

Camp said an American city arts study measuring 156 markets, including Buffalo, found Artpark & Company's economic impact is $10.7 million - the equivalent of 317 full-time jobs - with $490,000 in revenues for local government. These figures reflect the spending of the 220,000-plus who attended Artpark events in 2013.