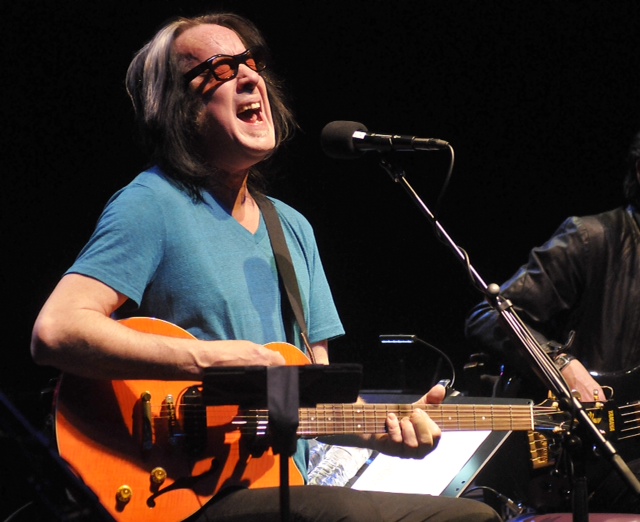 Review and photo by Sophia Smith

"An Unpredictable Evening with Todd Rundgren" is how Mr. Rundgren's current tour is christened, and it certainly proved to be an unpredictable concert at the Seneca Niagara Casino Friday night.

Rundgren, who arguably has helped mold modern music as a performer and producer, has been recording for more than four decades, been a producer on some of the biggest hit albums of the past and present, and is still going strong with no end in sight.

At the sold-out show in the intimate 440-seat Bear's Den Theater, the crowd was pumped and Rundgren and crew were primed and ready to deliver a fantastic sampling of this prolific artist's talent and hits. Rundgren was accompanied onstage by several of his longtime and favorite partners in crime, including Kasim Sulton on bass and vocals, Jessie Gress on guitar and vocals, and Prairie Prince on drums and percussion (Prince also gave a grand display of his bongo talents).

The audience was in for a few fun treats with this show. Rundgren and gang bounded on stage in a great mood and started out the set with "Friday," which Rundgren seemed to be ad-libbing and just goofing with the whole way through. His rendition might have been imagined that morning over breakfast. The Rebecca Black cover was lively and fresh and set the tone for the evening (fun).

After some initial banter with the crowd, Rundgren graciously invited those with not-so-hot views to come up to the front rows to better enjoy the show. There were, surprisingly, a few no-shows leaving vacant prime seats. Many eager fans quickly grabbed the gold coast seats, and one woman mentioned it was her birthday while passing the stage. This propelled Rundgren and his bandmates into a cheeky, impromptu rendering of "Happy Birthday" for this lucky lady.

How many concerts with mega-rock legends do you attend where you will see that happen? None. Which is what makes seeing Rundgren so unique and exciting.

Rundgren was engaging and affable throughout the entire show, often cracking jokes before a song and pretty much telling the audience to relax and enjoy the ride. He assured us, "You will not get gypped out of the hits, don't worry," which is exactly what every concertgoer expects at any concert.

Of course, most artists don't have the courage or candidness to be as forthcoming as Mr. Rundgren. It's kind of akin to a priest telling the congregation at a wedding, "I'll make this brief, because I know you all want to get out of here ASAP and hit the party" (understood niceties in society, which are rarely or never actually vocalized). Well, Rundgren tells it like it is and then some. I can't imagine him holding back about anything.

In between dazzling the audience with old and new tracks, he regaled us with a charming tale of how a recent Grammy Awards after-party unfolded. It involved a super-secret VIP entrance, hot French electronic group Daft Punk (who have sampled his music), table-hopping, and his sense of humor regarding the music industry and its hierarchy.

Rundgren not only enchanted the audience with his singing and masterful guitar playing, he also tickled the ivories on a few tracks, which gave the show some variety. This truly "unpredictable" evening just kept getting better, and it was a somewhat shocking, yet much enjoyed surprise, when the band started the familiar intro to Daft Punk's "Get Lucky."

The crowd loved this little injection of pop gooiness and ate it up gladly, jumping to their feet and dancing in the aisles.

Rundgren is a rare musical virtuoso who not only sings, plays guitar, bass, piano, drums, saxophone, theremin and ukulele (he now resides in Hawaii, so it is a prerequisite), but is an engineer, a producer and a multimedia artist. He is as comfortable playing with the Metropole Orchestra in Amsterdam as he is solo on a small stage. He has produced some of the best-selling artists on the planet, including Janis Joplin, the New York Dolls, Hall & Oates, Alice Cooper, Steve Hillage, Tom Robinson, The Tubes, Patti Smith, Grand Funk Railroad, Meatloaf and XTC.

So now, in addition to Phoenix, Hotel Costes, the XX, Mark Ronson and Girl Talk, Todd Rundgren is topping the list of favorites on my playlists. I just added a number of his offerings to my musical library, and I suggest you do the same.

Take my advice and catch Rundgren for one of his remaining kick-ass shows on this tour. See and hear him up close and personal - or catch Rundgren on tour with Ringo Starr & His All Starr Band this summer at Artpark.