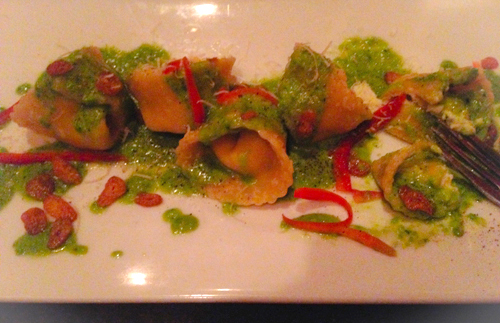 There isn't much to look at walking up to the unassuming Trattoria Aroma on Bryant Street right off of Elmwood. However, as soon as you swing open the door you are lead into a space painted the brightest hue of red illuminated by dimmed overhead lighting and tea candles adorning every table as well as spaciously placed along the sweeping bar.

Greeted by the Trattoria Aroma hostess with a "Happy Valentine's Day", our coats were checked and we were led away to a table for two conveniently located next to the baseboard heater: perfect for a frigid February night.

After ordering our drinks, an ominous sounding "Dark and Stormy" and a glass of Riesling, a waiter came over and delivered a basket of bread and drizzled each of us a small plate of olive oil in which to dip it. Yes, this is standard fare at Italian restaurants; however, this olive oil was something special. It had a citrus herb taste that prompted us to ask our server for another basket of bread. Four measly slices isn't sufficient when you're soaking up such flavorful olive oil!

In between, gorging ourselves on baskets one and two, we ordered an appetizer with our entrees. We decided to start with their polpettini napolenta, two mozzarella stuffed meatballs served with sauce and adorned with Swiss chard. Normally, I am very apprehensive about ordering meatballs from a restaurant. Growing up in a family comprised of Sicilians, I hold the average meatballs to a higher standard. Luckily, not only was I proven wrong, but I was wowed. The meatballs were so tender and so flavorful that along with a meatball, I was also eating crow.

For our entrees, my date and I both decided upon pasta dishes. He went with the rigatoni aroma, and I with one of the specials of the day simply titled tortellini. Upon the arrival to our table, I was rather surprised. His plate looked as I expected it to, rigatoni pasta in a meat sauce with pieces of sausage as well as onions and mushrooms mixed in as well. My plate arrived with five neatly crafted tortellini drizzled in pesto pea sauce with roasted red peppers strategically placed on the plate. What a Valentine's Day treat!

I will admit, I was skeptical. I had never seen tortellini look like this nor had I ever tried pesto pea sauce. After some coaxing from my date, I took my first bite. It couldn't be bad, right? After all, it was comprised of ingredients I liked separately. It was phenomenal. The first bite is overwhelming with different flavors and textures. The pasta, clearly handcrafted and not store bought, was so fresh and perfectly al dente. The filling of the tortellini had to be about four different cheeses, each of which had its own distinct flavor. The pesto pea sauce, of which I had previously been weary, was truly delightful and artistically combined the basil with the peas. Before I dug in, I couldn't believe there were only five pieces of pasta. As I was midway through my entrée, though, I could see why. The dish was so rich and so filling that I was only able to eat four of the five perfect little pockets of cheese.

Despite being filled to the brim, my date insisted we order dessert since it was such a special night. After looking at the dessert menu, we agreed to split what we thought would be chocolate cake. What we received was more of a cross between a chocolate torte and fudge. The tiny sliver of chocolate was sprinkled with sea salt on top, which added a nice touch. Despite being very good, it was far too small, and not at all what we expected. The dessert proved to be the only part of our experience at Trattoria Aroma that we were dissatisfied with.

Between the two of us, we had three drinks, an appetizer, two entrées and shared a dessert.  All this for under $100 makes for a great deal on authentic Italian cuisine.

I would recommend Trattoria Aroma to anyone seeking an Italian meal with an innovative twist of culinary genius, as well as a truly romantic and intimate atmosphere.