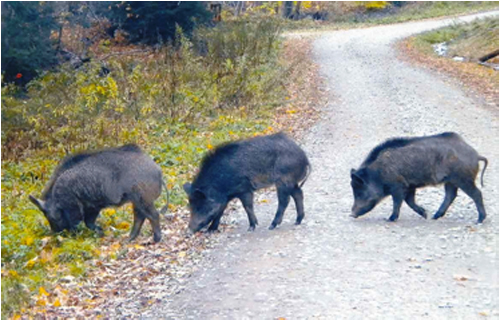 Domestic pigs were brought in to the southeastern United States in the early 1500s by the Spanish explorers and settlers. In the following years, these pigs would escape from captivity, and turn into wild ones (hogs) on their own. The Eurasian wild boar or Russian boar was first introduced in 1912 in North Carolina. Both species eventually bred and grew up to be nasty animals, but remained to be a staple food.

The ferociousness of these animals varies throughout any given year or season. The name "boar" is used to describe an adult male of the species including domestic pigs. They are officially referred by the state Department of Environmental Conservation as Eurasian boar and are native to Asia and Europe. Boars are a danger to humans, domestic animals, wild animals, birds, and heavily damage agricultural crops. But don't be too concerned about them here in Western New York; none has been sighted or recorded, except in November 2009 where three were spotted and photographed in Alleghany State Park. They were eradicated quickly, not leaving any little squealers behind.

By latest estimates, there are 5 million feral hogs/pigs in the United States.

Therefore, New York has no closed season for hunting Eurasian boar. You can shoot them on sight, at anytime, any number; all other hunting laws and firearms regulations are still in effect. Besides the reasons given above, they can carry and can transmit several serious diseases, including swine brucellosis, E. coli, and trichinosis, that could infect livestock and other wildlife, even humans. Some of these diseases, if introduced to domestic swine, can decimate the pork industry.

For purposes of this story, let's just refer to these creatures as "boar" from now on. In Pennsylvania, boar hunting has been a big sport for many years, but because of the threat of the state becoming overpopulated with them, similar to states like Florida, California, New Mexico, and Texas, Pennsylvania game commissioners gave preliminary approval to regulations that remove protection from the hogs statewide, plus prohibit the importation, possession and release of feral swine and wild boar into the wild. The commission will be voting on this proposal in April. This will heavily affect hog hunting on game preserves.

Note that the new law says: "importation and possession." The law would also eliminate boar hunting on game preserves, (i.e. enclosed shooting facilities) and that will affect a lot of livelihoods. There is quite a bit of resistance to the law. Wild game farm operators agree that boar in the wild are not good, but that game farms should be exempt. The Pennsylvania Game Commission's argument is that's how they got into the wild in the first place; they escaped those farms, and they harm the natural resources.

In Texas, hunting wild boar is a big part of hog hunting ranches' revenue. Actually, Texas is overrun with these four-legged critters. Texas is home to nearly 2.6 million feral hogs, the largest feral hog population in the U.S. And there are a lot of game farms that advertise this kind of hunting.

Prices vary. On one farm in Texas it advertises "hog hunts, one hog a day," $125 a day per person and trophy-size hog is $250 per day per person. This same ranch has a penned-in area with boar/hogs, and they hunt with dogs, just like you see on TV's Hog Hunters show. They call it "hog dog" hunting, and it is a guaranteed hunt and not for the faint of heart.

I saw one place that sells wild boar meat. You can buy whole wild boar tenderloin for $14.95 per pound, with a minimum of 2 pounds, plus shipping and handling. Handling and carton charges are from $12 to $18, the appropriately sized cardboard and foam box and 3 pounds dry ice per box. On top of that, add shipping. Plus, they recommend buying at least 12 pounds at a time, as it is more cost effective.

I dunno; I'll just go to the supermarket for my pork and bacon.

In New York state, a new law was passed on Oct. 21, 2013, that made it illegal to "import, breed or release Eurasian boars in New York." That part of the law was effective immediately, and in addition; "After Sept. 1, 2015, it will be illegal to possess, sell, distribute, trade or transport Eurasian boars in New York." As far as your domestic "pot bellied pig" or farm pig, the law does not affect them.

It is suspected that later New York boar populations were introduced when the animals escaped from nearby hunting preserves and roamed into New York. In a battle that will no doubt be an ongoing one to stop an invasion of boar, U.S. Drug Administration wildlife agents are patrolling suspected regions of New York state right now, while the ground is covered with snow, by helicopter for any activities. They are not meat hunting, just looking for populated areas - a good idea to get rid of them before the people in the state realize there's a big problem.

Currently, New York has four breeding populations, and they are found in the counties of Onondaga, Tioga, Cortland, Delaware, Sullivan, and Clinton. Remember I told you Clinton County is located along side of Lake Champlain? That is the geological location of counties and boar sightings in our state.

I met this guy, Bob H. in Ray's Tavern one evening, and he had just moved back into this area from Florida after 20 years. We got into a conversation about Florida, and it was around the time I was doing the whippoorwill story for the Sentinel a while back.

He started telling me about the wildlife in Florida and the words "Chuck-wills-widow" crossed his lips and I said, "Whoa! Chuck-wills?" He said, "Yeah, I lived on the outskirts of Jasper," adding Jasper was about the size of Youngstown.

It just struck me funny because I was trying to get my facts straight about whippoorwills at the time of our conversation, and found they were relatives to the Chuck-wills-widow. He commented "Yeah, they start their calling," - "yapping" he called it - "about dusk, sometimes all night, and into dawn. You hardly ever see one," he continued, "but you sure can hear them, and sometimes at night you will see their bright yellow eyes in your headlights sitting along the side of the road or other times in flight."

Are you wondering how a bird can be named the "Chuck-wills-widow?" Me too, so I found out. It was named after the sound of its call. The first chirp or sound it makes resembles that of a short "chuck" followed by a sound like "will." The last sound really sounds like "widow."

If you want to hear what this bird sounds like, Google the Cornell Lab of Ornithology website, type in the bird's name and go to the "sounds" link. While you are there, check the whippoorwill call too.

So when the Florida snowbirds get back here from their winter vacations while we sat up here freezing our hinnies off, ask them about Chuck-wills-widow, and see what they say.

Snow buntings have been spotted at Obie and Dee Oberlander's bird feeder on their farm in Youngstown. Apparently the bird feeders attracted them, but the Oberlanders have been giving them cracked corn and they seem to like it. Dee said there are so many of them, they have to go out a couple times a day to add more feed. Flocks have been estimated up to 100 birds at a time.

These birds come from the high Arctic and migrate "south" to the northern United States for the winter. Can you imagine that - snowbirds from the Arctic Circle coming here? If you see any buntings in your yard, let me know.

Our local feathered friends need you now, not in the spring. They can get their own seed then, but with this snow and freeze, it's impossible. Feed them often.