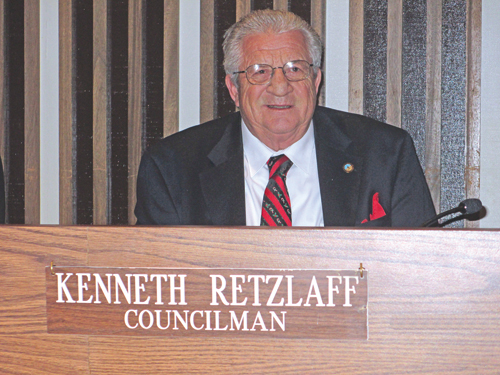 The Wheatfield Town Board said "so long" to one of its own on Monday as it honored Councilman Kenneth Retzlaff.

As board patriarch, Retzlaff had introduced his fellow councilmen as well as Town Supervisor Bob Cliffe to their board jobs and was sent off from his final meeting with their fond memories and a standing ovation from both his fellows and the audience.

Retzlaff, a quiet spoken Wheatfield farmer, has served on the Town Board for 32 years, the last 16 as deputy supervisor.

Retzlaff had decided to retire this year, and his nephew Randy Retzlaff ran for and won his uncle's seat.

Councilman Larry Helwig, who has worked with Kenny Retzlaff on the board for 22 years, described him as "the man who had the compassion on the board."

"I really learned a lot from Kenny," Helwig said.

"He's always been positive," agreed Councilman Gil Doucet, chuckling over the memory of visiting the Retzlaff farm with a question for Retzlaff. "He stopped milking the cows to talk to me."

Councilman Art Gerbec also remarked on Retzlaff's advice, "You said above all things be honest with people. Treat them like you would want to be treated yourself."

Cliffe commented that he has the greatest respect for Retzlaff, who "doesn't talk a whole lot," but concluded, "If I had to ask for a father, you'd be it."

•The old Summit Park Mall may still rise again. Cliffe said that after receiving calls about the possible sale of the mall, he contacted mall owner Jim Anthony, who told him nothing had been signed and sealed yet. Two Toronto firms have been looking into the possibility of purchasing the mall, and one has spent considerable time here checking out the property and meeting with the Niagara County Industrial Development Agency. Cliffe said the town is really looking forward to the day the mall reopens.

•The board approved a $20,000 one-year contract with the SPCA of Niagara County for dog control, about a $3,500 increase from the current year. The town may have to look at other possibilities for collecting stray dogs next year.

"They (the SPCA) are basically telling us they may not be in the dog control business in 2015," Cliffe said.

•The board approved a certificate of incorporation for the Wheatfield Local Development Corp. and authorized attorney Robert O'Toole to file it and the names of its initial board of directors with the secretary of state.

Cliffe said the filing is part of the approval process for the new group.

O'Toole said the Wheatfield Local Development Corp. will be seeking grant funding, promoting business in the town and working with businesses interested in locating here.

"This is really an outstanding list of initial directors," he said.

•Gerbec noted new Councilman Randy Retzlaff already has agreed to fill in to chair the town's Agricultural Committee, while the group's current chairman is on leave of absence. A new chairman for the Drainage Committee is being sought.

•The Wheatfield Seniors Christmas dance was snowed out Saturday. A new date is being planned.

•The next Town Board meeting will be Jan. 6, with the annual reorganization meeting at 7 p.m., followed by the regular meeting at 7:30 p.m.