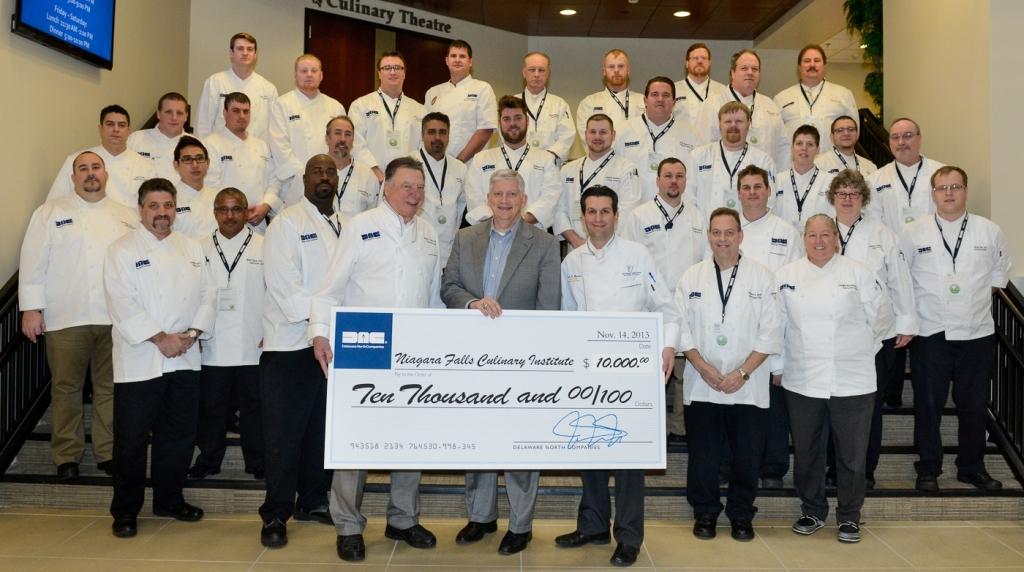 Delaware North Companies, a global leader in hospitality and food service with operating companies in the lodging, sporting, airport and gaming and entertainment industries, has established an endowed $10,000 scholarship at Niagara County Community College for culinary and hospitality students.

NCCC staffers said Delaware North's passion, innovation and unwavering commitment to the highest level of training for its culinary and service teams have been crucial in its reaching the forefront of the hospitality industry. For this reason, the company established the Delaware North Companies Scholarship to help students achieve their goals in pursuing a degree in culinary curriculums at the Niagara Falls Culinary Institute.

The NFCI, which opened in 2012, is one of the most comprehensive and well-equipped culinary arts facilities in the eastern U.S. It features 25 teaching labs, classrooms and seminar rooms with space for up to 150 students at cooking stations and 320 students in classrooms at one time.

NCCC Foundation Director Deborah Brewer said, "On behalf of NCCC and the foundation, we are grateful to Delaware North Companies for this new scholarship, which will touch so many lives."

To apply for this scholarship, an applicant must be a current or incoming full-time student who demonstrates a strong work ethic and a desire to meet educational goals. Applicants must have and maintain a 2.5 grade-point average and must be enrolled full-time in the culinary arts and hospitality degree program. The scholarship will be available for the fall 2014 semester. To apply, visit NCCC's scholarship webpage at http://www.niagaracc.suny.edu/scholarships/. The deadline to apply is March 7, 2014.

Delaware North Companies began in 1915 in Buffalo, where its global headquarters can still be found, and where it continues to be a major contributor to the Western New York community. It is one of the largest privately held companies in the world, and each year its 55,000 associates serve half a billion customers in the U.S., Canada, the United Kingdom, Australia, New Zealand and Singapore.