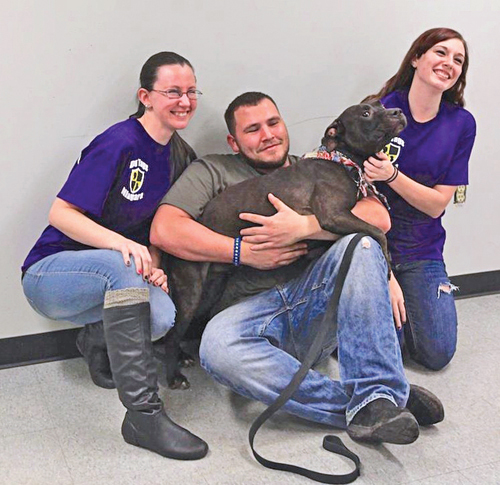 The Niagara County SPCA is pairing with local veterans' groups and representatives from Niagara University to bring healing to veterans in the community and animals in the animal shelter.

The shelter has launched Dog Tags Niagara, a program that has been in the works for more than a year.

It started with an employee from the SPCA who had a personal interest in soldiers returning from deployment with post-traumatic stress disorder.

Animal Rescue and Cruelty Dispatcher Lauren Zaninovich wanted to offer help in an unconventional way to solders returning home from war in our area. With the many other programs forming at the shelter, the idea was placed on the back burner until it was sparked again by a volunteer from the Niagara County SPCA who works at the Niagara Falls Reserve Base in the 914th Air Lift Wing.

Staff Sgt. Frank Coseglia made the proper connections between the air base and the shelter and months later a program was born.

When asked why getting this program off the ground was so important to him Coseglia said, "I've been in the Air Force for more than 10 years and have been involved with the shelter for the past two years and have seen the needs of both the veterans coming back from deployment and the animals at the SPCA. Both are causes I believe strongly in."

Today, Dog Tags Niagara is in its infancy with three volunteer veterans who come in regularly for their dose of canine "therapy" and dish out a little therapy as well.

Joe Ruszala, co-founder of Paws and Patriots, Erie County SPCA's veteran program and co-founder of the veteran's program Courage to Heal, which pairs service dogs with veterans, has been instrumental in jumpstarting the program at the Niagara County SPCA. Ruszala worked with Executive Director Amy Lewis of the Niagara County SPCA when he helped to initiate Paws and Patriots in Erie County back in 2010.

Ruszala is excited about the program and its inception at NCSPCA and had this to say: "This program has tremendous potential. We are pairing the pit bulls of the canine world with the pit bulls of the human world. Like the dog, veterans are stigmatized and sometimes have a bad rap. They come back from deployment with difficulty integrating back into society and often get themselves into trouble. The dog on the Dog Tags Niagara logo is a pit bull and symbolizes their similarities."

"There is a lot of research linking the bond between humans and animals in healing and good health in general. Even if there weren't studies, I know that when I come home after having a bad day, my dogs are there to greet me and put an instant smile on my face," says Lewis of the human-animal bond. "Animals help their humans cope with loss; help in the grieving process; help with depression and even Asberger Syndrome."

Veteran Frank Morabito of Lockport believes strongly in the ability of animals to heal humans. Morabito joined the U.S. Army in 2006 and then entered the 82nd Airborne Division in 2007, where he was in an aerial recovery team in Afghanistan. After six years in the Army, he left active duty in March of 2012. Upon his return, despite coming home to his wife Megan and family, something seemed to be missing; there seemed to be a void in his life. Frank transferred to the National Guard shortly after his move and he and his wife were expecting a son. It was a few months later when Frank realized what was missing in his life: a dog named Otto.

Frank went to the Niagara County SPCA in October of 2012. His options were many. There were dogs in virtually every kennel including a litter of adorable puppies. Instead of going for the puppy in the window, Frank had his mind set on a very goofy pit bull mix named Victor. Things were a little rocky when Frank and his wife and their miniature dachshund first met Victor. Staff at the shelter was a bit nervous introducing Victor to the tiny dachshund because of the incredible size difference. It seemed like the Morabito family dog was even more terrified to meet Victor.

Victor all but turned himself inside out to befriend the tiny dog that quaked from between his owner's ankles. Victor did have his issues to overcome, however; he had a strange fear of concrete when Frank first took him home. Victor tipped-toed around avoiding concrete as if maneuvering around a minefield. Victor, who is now Otto, overcame his fear of sidewalks and has become a certified therapy dog, and will be able to help many others as he has helped Frank through many of his difficulties since returning home.

Frank had to say this of Otto: "Yes, my family is great and has also been there with me through my ups and downs; but there is just something about having Otto's affectionate presence nearby. He is not only my dog - my wife and 8-month-old son Domenic love him as well. He is always there when I or anyone else needs him or even if we don't."

Representatives from Dog Tags Niagara will be available at the Niagara County SPCA from noon to 4 p.m. Saturday, Nov. 17, and Sunday, Nov. 18.

For additional information on the program, call the shelter at 731-4368 and leave a message for Toni or Susan.